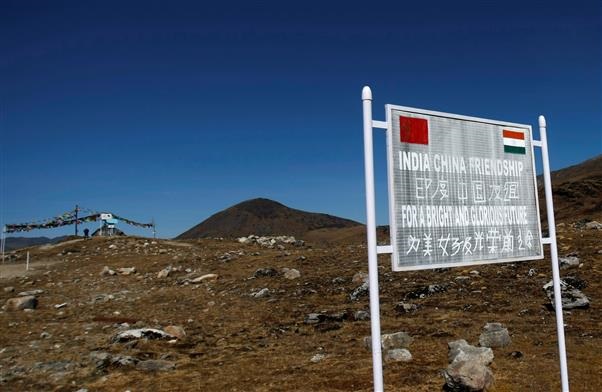 A signboard is seen from the Indian side of the Indo-China border at Bumla, Arunachal Pradesh. Reuters file

China’s development and construction activities “within its own territory” are “normal” and “entirely a matter of sovereignty”, the Chinese Foreign Ministry said on Thursday when asked to react to reports that Beijing has constructed a new village in Arunachal Pradesh.

“First, I’d like to tell you that China’s position on the east sector of the China-India boundary, or Zangnan (southern part of China’s Tibet), is consistent and clear. We have never recognised the so-called ‘Arunachal Pradesh’ illegally established on the Chinese territory,” said the ministry’s spokesperson Hua Chunying.

She was asked if reports of China intruding into the Indian territory to build a village were true and if the area was under Chinese control for a long time.

Reports based on satellite images show a new village of over 100 homes constructed by China in Arunachal Pradesh.

The first image dated August 26, 2019, did not show any human habitation, but the second one of November 2020 showed a row of structures.

The Indian Foreign Office has also reacted to the reports by stating that it keeps a “constant watch on all developments having a bearing on the country’s security” and takes necessary measures to safeguard its sovereignty and territorial integrity.

The India-China border dispute covers the 3,488-km-long Line of Actual Control (LAC). The report about China setting up a new village in Arunachal Pradesh comes amid a military stand-off in eastern Ladakh for over eight months.