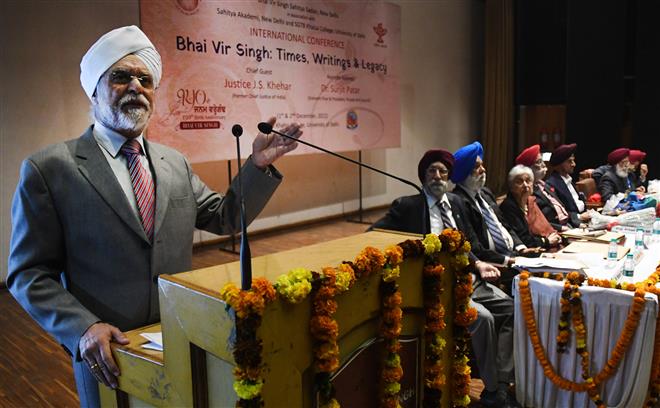 Sikhism is facing the same three challenges it faced during the times of Bhai Vir Singh, said former Chief Justice of India Justice (retd) JS Khehar said today while speaking at the inaugural function of the two-day international conference to mark 150th birth anniversary celebrations of the noted Sikh scholar.

He listed modernisation, mythologisation and proselytisation (conversions) as the challenges for the Sikh community. “Bhai Vir Singh is as relevant as he was in his times. The more we learn from him, the more we will be able to deal with conflict that we face at present,” he said.

Justice Khehar cited the Britannica encyclopaedia to say Bhai Vir Singh “wrote at a time when Sikh religion, politics and the Punjabi language were under strong attack by the English and Hindus that the Sikhs had started doubting the value of their way of life. With his versatile pen, he extolled Sikh courage, philosophy, and ideals”. Justice Khehar spoke about novel “Sundari” authored by Bhai Vir Singh in the late 1890s. It is story of a Hindu girl and her brother Balwant Singh. The woman takes a conscious decision to join the Sikh faith. “Bhai Vir Singh portrayed the woman as an independent decision-maker,” he said.

Dr Surjit Patar, poet and president of the Punjab Arts Council, made a point about Bhai Vir Singh by picking out a poem to explain what could be his thought process. Bhai Vir Singh was born at time when the British were controlling Punjab. “His writings reflected pain,” said Patar.

A message from former Prime Minister Manmohan Singh was read out by Dr Mohinder Singh, Director, BVSS. “Bhai Vir Singh is remembered as the father of the modern Punjabi literature. His writing played major role in modern Punjab,” the former PM’s message said.

Prof KL Tuteja, the author of “Religion, Community and Nation: Hindu Consciousness and Nationalism in Colonial Punjab”, said Bhai Vir Singh’s writings not only brought a change in making Punjabi a modern language, but also made Sikhs aware of their identity.