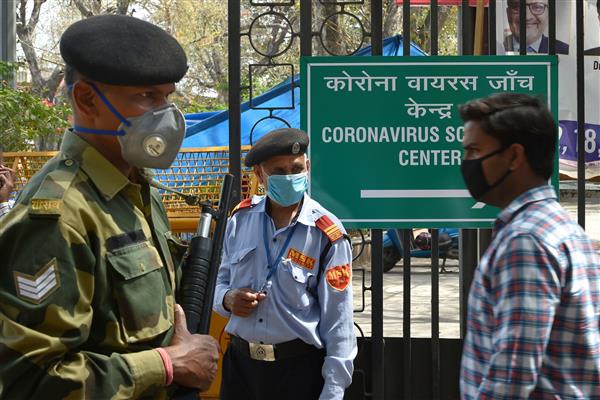 The number of novel coronavirus cases climbed to 1,397 on Tuesday after 146 new infections were reported in the past 24 hours across the country, while the death toll due to the pandemic rose to 35, according to the Union Health Ministry.

The active cases of COVID-19 (coronavirus disease) stands at 1,238, while three deaths -- two in Punjab and one in Maharashtra -- were reported, the ministry said in an updated data on Monday night.

As many as 123 people were either cured or discharged and one had migrated, taking the total number of cases due to the contagion to 1,397, including 49 foreigners, it stated.

Maharashtra has reported the most deaths (9) so far, followed by Gujarat (6), Karnataka, Punjab and Madhya Pradesh (3 each), Delhi, West Bengal and Jammu and Kashmir (2 each). Kerala, Telangana, Tamil Nadu, Bihar and Himachal Pradesh have reported a fatality each.

The highest number of cases of the deadly disease was reported from Kerela with 234 infections so far, followed by Maharashtra at 216 and Uttar Pradesh at 101.

The number of COVID-19 cases in Delhi has gone up to 97, while Karnataka reported 83 confirmed cases and there are 79 infections in Telangana. Rajasthan and Tamil Nadu reported 74 cases each, followed by Gujarat at 73, and Jammu and Kashmir at 54.

Madhya Pradesh has 47 positive cases and Punjab reported 41 infections. Forty coronavirus cases have been detected in Haryana and Andhra Pradesh each.

The number of cases have risen to 26 in West Bengal, while Bihar has 15 cases. Ladakh and Chandigarh reported 13 cases each.

Ten cases have been reported from the Andaman and Nicobar Islands. Chhattisgarh has eight positive cases, while Uttarakhand has reported seven cases so far.

Goa has reported five coronavirus cases, while Himachal Pradesh and Odisha have reported three cases each. Puducherry, Mizoram and Manipur have reported a case each.

"Remaining 38 cases are being assigned to states to initiate contact tracing," the ministry stated.

Meanwhile, a religious congregation that took place between March 13 and 15 have given rise to the fears of a cluster and has sent authorities of both central and several state governments scrambling.

Some 24 people who took part in a religious congregation at Tabligh-e-Jamaat's Markaz in Nizamuddin West earlier this month have tested positive for coronavirus, Delhi Health Minister Satyendar Jain said on Tuesday.

Talking to reporters at his residence, he said, "700 people who attended this congregation have been quarantined, while around 335 people have been admitted to hospitals."

Nationals from the UK and France are among 281 foreigners out of 1,830 people who were found by the police in the last two days at the Markaz that became a key source of coronavirus spread in the country, officials said.

After the matter came to light, the Centre and the Delhi government swung into action to trace people who attended the congregation.  Delhi Police sealed off the area.

At least 8,000 people, including foreigners, visited the premises of the Markaz over the past month. Most of them have either returned or were in other Markaz facilities across the country, thereby having a link to some positive cases in those states, they said. — PTI