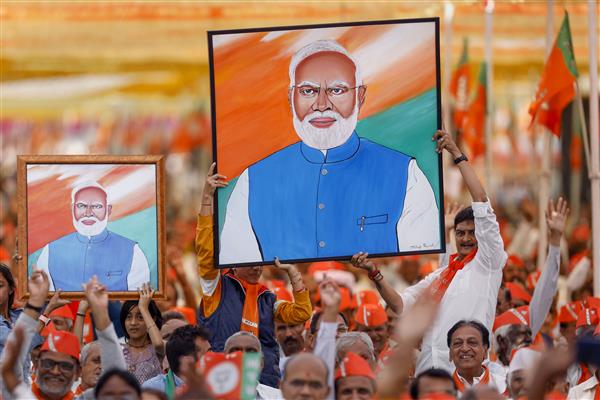 In yet another day of high-voltage campaign in Gujarat, the ruling BJP led by Prime Minister Narendra Modi again attacked the opposition Congress, charging it with “corruption”, “parivarvaad” and “sampradayevaad”.

Speaking in Vadodara, the PM said people of Gujarat used to live under fear when the Congress was in power because "anti-social elements” were given protection by the party.

“Electricity and water situation improved under the BJP. Today’s youth and first-time voters are with the BJP because they have seen our party working with a development agenda,” the PM said.

Comparing Sarma to a “petty troll”, the Congress said public servants needed to maintain “decorum of language and propriety”. Some of its leaders also claimed the “Prime Minister was scared of the success of Rahul Gandhi’s Bharat Jodo Yatra, which is why the BJP was targeting him”.

“The Chief Minister of Assam, unfortunately, sounds like a petty troll when he articulates sentences of this kind,” Congress’ Manish Tewari said, addressing the media in Ahmedabad.

“There cannot be a bigger proof of a government’s inefficiency than the move to change its Chief Ministers,” said Tewari, asking the BJP to speak on real issues than “diverting attention from issues affecting the public like inflation, joblessness, management of the Covid pandemic and corruption.”

The BJP replaced Anandiben Patel with Vijay Rupani, who was then replaced with Bhupendra Patel last year.

Referring to the Morbi bridge tragedy, he claimed the BJP had become “arrogant” and believed it cannot be ousted from power.

On AAP, the Anandpur Sahib MP said the kind of administrative experience, sensitivity and responsibility required to run Punjab, which borders Pakistan, has not been shown by the AAP government. “I would request the people of Gujarat to not repeat the mistake,” he said.

Pitching for AAP’s chief ministerial candidate Isudan Gadhv, Kejriwal called him a “young, educated man whose heart beats for the poor and is also the son of a farmer”.