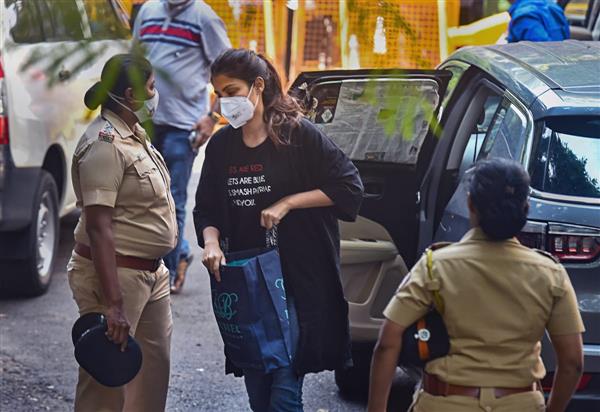 Actress Rhea Chakraborty arrives at NCB office for questioning in connection with the death by suicide case of late actor Sushant Singh Rajput, at Ballard Estate in Mumbai on September 8, 2020. PTI file

A special court here on Friday rejected the bail pleas of Rhea Chakraborty and her brother Showik, arrested by the NCB in connection with a drug-related case pertaining to the death of actor Sushant Singh Rajput, advocate Satish Maneshinde said.

The court also rejected the bail pleas of four other accused in the case — Abdul Basit, Zaid Vilatra, Dipesh Sawant and Samuel Miranda.

All six accused were likely to move the Bombay High Court for bail, Maneshinde added shortly after the ruling.

All accused are currently in judicial custody.

Until she gets further relief, Rhea (28), who was arrested on September 8 and sent to judicial custody till September 22, will remain in the Byculla Jail.

Special public prosecutor Atul Sarpande, appearing for the Narcotics Control Bureau (NCB), welcomed the decision and said the court, while rejecting the bail pleas, had accepted the contentions of the prosecution that the investigation was at a crucial stage.

“Once we get a copy of the order passed by the special NDPS court, we will decide next week on the further course of action and about approaching the Bombay High Court,” Maneshinde told media persons.

In the bail plea, Maneshinde forcefully argued that there was nothing on record to suggest that Rhea was in any way involved with the financing of illicit drug traffic or harbouring offenders in relations to any narcotic drugs or psychotropic substances.

He pointed out to Special Judge GB Gurao that the NCB was silent on the quantum of drugs, the type of drugs allegedly procured and financed by her, the quantum of the narcotics.

“The case against her is that she coordinated the delivery of drugs for her boyfriend (Sushant) and occasionally even made the payment for it…These allegations make for an offence that is bailable,” Maneshinde contended.

In her bail plea, Rhea had claimed that she was falsely implicated in the case.

Rhea had also retracted the confessional statement recorded by the NCB when she was questioned for three days.

She had claimed that the NCB officials had coerced her into making self-incriminating statements.

Retracting her “self-incriminating confessions”, she termed her arrest as “unwarranted, without any justification,” “arbitrarily curtailed her liberty”, she faced death and rape threats and there were no female officers present during her interrogation, which took place from September 6 to 8, with her arrest coming on the final day.

The NCB had strongly opposed the bail pleas and said that Rhea was conscious of the fact that Rajput was consuming drugs but despite that, she continued procuring and making payments for drugs.

The NCB had said although the quantity of banned drugs seized in the case was small, it was still a commercial quantity and worth Rs 1,85,200.

“Rhea Chakraborty and Showik Chakraborty financed and arranged drugs for Sushant Singh Rajput and at his instructions,” the NCB had said in its affidavit responding to the bail pleas.

“It added that as per the statement given by co-accused and Rajput’s domestic help Dipesh Sawant, he used to procure drugs from other accused in the case on the instructions of Rajput and Rhea. The financial transactions were handled by Rhea and sometimes Rajput. Dipesh Sawant used to procure drugs along with co-accused Samuel Miranda (former house manager of Rajput) for Sushant Singh Rajput’s consumption,” the affidavit said.

The NCB had further said if the accused are released on bail, they may tamper with evidence and try to intimidate key witnesses in the case.

Rejecting the defendants’ plea, Special Judge Gurao rejected their bail applications and all the accused will continue to remain in custody till any relief is granted by the Bombay High Court.

The NCB began its investigation after the Enforcement Directorate (ED), which was probing money laundering charges linked to the case, shared the social media chats retrieved from Rhea’s mobile phone, hinting at the use of banned drugs.

Rajput was found hanging in his residence in suburban Bandra on June 14.

The Central Bureau of Investigation (CBI) is separately probing a case against Rhea and others for allegedly abetting the 34-year-old actor’s suicide. PTI/IANS