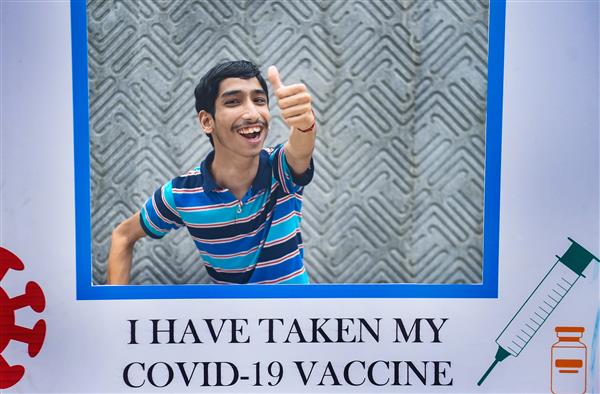 A beneficiary poses for a picture after receving the COVID-19 vaccine dose, during a vaccination drive for the specially-abled people and their family members, at Jai Vakeel foundation in Mumbai on Wednesday. PTI photo

Holding that Covid-19 vaccination policy was “prima facie arbitrary and irrational”, the Supreme Court has asked the Centre to place on record all relevant documents and file notings along with purchase history till date of all jabs, including Covaxin, Covishield and Sputnik V.

“…due to the importance of vaccinating individuals in the 18-44 age group, the policy of the Central Government for conducting free vaccination themselves for groups under the first 2 phases, and replacing it with paid vaccination by the State/UT Governments and private hospitals for the persons between 18-44 years is, prima facie, arbitrary and irrational,” a Special Bench headed by Justice DY Chandrachud said.

Noting that the Union Budget for Financial Year 2021-2022 had earmarked Rs 35,000 crore for procuring vaccines, the Bench directed the Central Government “to clarify how these funds have been spent so far and why they cannot be utilised for vaccinating persons aged 18-44 years”.

Only 1 strain of Covid variant first detected in India is now of concern: WHO

The top court—which had taken suo motu cognizance of Covid19 management – had issued a series of directions on May 31 but the order was released only on Wednesday.

Seeking complete data on the Central Government’s purchase history of all the COVID-19 vaccines—Covaxin, Covishield and Sputnik V—till date, it ordered the Centre to file an affidavit in two weeks and posted the matter for further hearing on June 30.

The data should clarify: (a) the dates of all procurement orders placed by the Central Government for all 3 vaccines; (b) the quantity of vaccines ordered as on each date; and (c) the projected date of supply, said the Bench which had on Monday remarked that the policy makers “must have ears on ground” to effectively deal with the “unprecedented” crisis.

It also asked the Centre to specify the steps being taken by it to ensure drug availability for mucormycosis or black fungus. It also directed all states and union territories to spell out their respective stand on providing free vaccination.

It sought data on the percentage of population vaccinated (with one, and both doses), as against eligible persons in the first three phases of the vaccination drive, including rural-urban vaccination figures and an outline as to how and when the government wanted to vaccinate the remaining population in phases 1, 2 and 3.

The Centre had submitted that the current Liberalised Vaccination Policy enabled State/UT Governments and private hospitals to procure 50% of the monthly CDL approved doses in the country at a pre-fixed price and that it would spur competition which would attract more private manufacturers that could eventually drive down prices.

However, finding fault with the policy, the top court said, “Prima facie, the only room for negotiation with the two vaccine manufacturers was on price and quantity, both of which have been pre-fixed by the Central Government. This casts serious doubts on UoI’s justification for enabling higher prices as a competitive measure.

“Furthermore, the Central Government justifying its lower prices on account of its ability to place large purchase orders for vaccines, raises the issue as to why this rationale is not being employed for acquiring 100% of the monthly CDL (Central Drugs Laboratory) doses,” it said.

The Centre had on Monday asserted that the entire eligible population would be vaccinated by the end of 2021 even as the Supreme Court sought clarifications of vaccine procurement by states, pricing and the need for mandatory registration on the CoWIN app for people to get vaccinated.