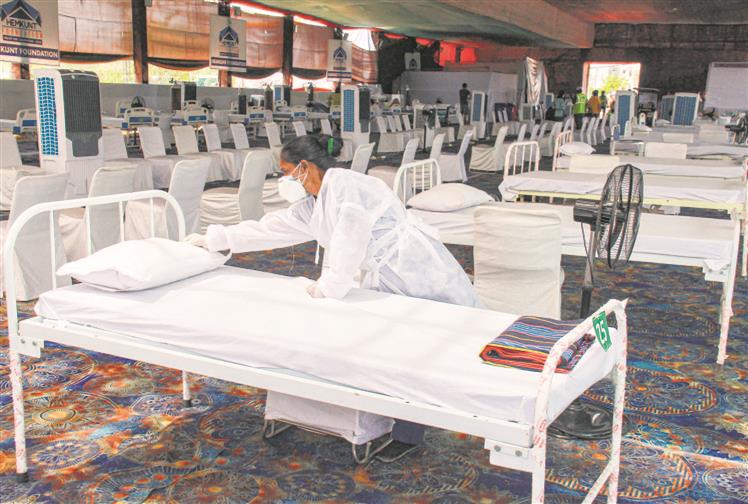 A worker prepares a bed at an oxygen centre in Gurugram on Wednesday. PTI

The Independent Panel for Pandemic Preparedness and Response (IPPPR), which spent the last eight months reviewing evidence of the spread of Covid-19, concluded on Wednesday that the pandemic was preventable and the World Health Organisation could have sounded the Public Health Emergency of International Concern (PHEIC) alarm sooner.

Documenting what happened and why, the panel said, “Covid-19 was a preventable disaster. A combination of poor strategic choices, unwillingness to tackle inequalities, and an uncoordinated system created a toxic cocktail which allowed the pandemic to turn into a catastrophic human crisis.”

Examining the time the WHO took to declare Covid-19 a PHEIC on January 30 last year, the panel said, “A PHEIC is the loudest alarm the WHO Director-General can sound. The panel’s view is that the outbreak in Wuhan is likely to have met the criteria to be declared a PHEIC by the time of the first meeting of the emergency committee on January 22, 2020.”

The PHEIC was declared eight days later on January 30. The panel found weak links at every point in the chain of preparedness and response and said the preparation was inconsistent and underfunded and the alert system was too slow and too meek.

‘Global political leadership was absent…The escalation of the pandemic could have been prevented but the declaration of PHEIC did not lead to an urgent, coordinated, worldwide response. It was not until the number of Covid-19 cases increased dramatically that governments took serious action to prevent transmission. February was a lost month of opportunity to contain the outbreak,” said the committee the WHO convened last May to report on the lessons learnt from Covid.

For the future, the committee called upon the World Trade Organisation (WTO) and WHO to convene a meeting of major vaccine-producing countries and manufacturers to agree to voluntary licensing and technology transfer for Covid vaccines.

“If actions do not occur within three months, a waiver of intellectual property rights under the Agreement on Trade-Related Aspects of Intellectual Property Rights should come into force immediately,” the panel said backing patent waivers for affordable vaccine access.

It also urged high income countries to provide to the 92 low and middle income countries at least one billion vaccine doses no later than September 1 and more than two billion doses by mid-2022 and called upon the G-7 to urgently commit to providing 60 per cent of the $19 billion required for global efforts in 2021 for vaccines, diagnostics, therapeutics, and strengthening of health systems.