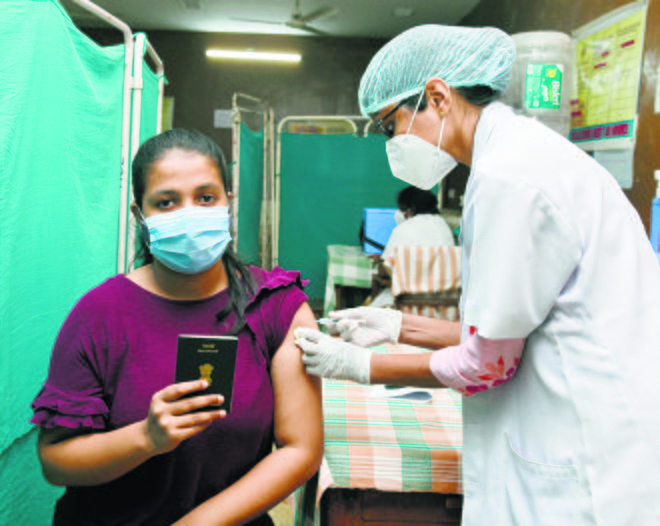 A health worker administers a vaccine dose to a student in Hyderabad. PTI

A preprint of the first Indian study among doctors and nurses who received both shots shows that a higher proportion of those inoculated with Covishield produced antibodies compared to those who received Covaxin, even though both shots elicited a good immune response.

The study highlights the significance of speedy vaccination to avert a potential third wave of the pandemic, signalling the urgency of expanding the coverage, which is running low due to stock shortages of Covaxin and Covishield.

While no difference was observed in relation to gender, body mass index, blood group and any comorbidities, people aged 60 years and above or those with type 2 diabetes had a significantly lower seropositivity rate, indicating a comparatively lower antibody response. The study also shows a good safety profile for both vaccines.

“Both the vaccine recipients had similar solicited mild to moderate adverse events and none had severe or unsolicited side-effects. In conclusion, both vaccines elicited good immune response after two doses, although seropositivity rates and median anti-spike antibody titre was significantly higher in Covishield compared to Covaxin arm,” researcher AK Singh says.

India has so far inoculated 43 per cent of its 60-plus people with one dose (the rates being as low as 35 per cent in Punjab, 39 in Telangana, and as high as 78 in Himachal Pradesh and 80 in Tripura). In the 45-plus group, 37 per cent people have received at least one dose.

The government is hoping to reach all 95 crore adults by December this year, with vaccine stocks expected to improve from June.