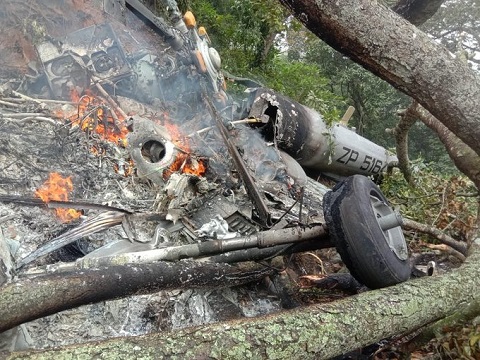 The data recorder of the ill-fated M 17 helicopter of the Indian Air Force that crashed near Coonoor in Ooty leading to the loss of lives of Chief of Defence Staff General Bipin Rawat, his wife Madhulika, and 11 other armed personnel, was recovered on Thursday morning.

A 25 special team of the Air Force officers led by Wing Commander R Bhardwaj has recovered the black box and more details are awaited. The team has been conducting search operations since morning as the priority on Wednesday was to recover the bodies safely to Wellington Army hospital.

Meanwhile, a six-member special medical team from Coimbatore is attending to the treatment of the lone survivor in the Coonoor helicopter crash, Group Captain Varun Singh who is struggling for life at the Wellington Army hospital.

Tamil Nadu Chief Minister MK Stalin, who is at Nilgiris, has already communicated to the Army team that the Tamil Nadu government would support the medical treatment of Group Captain Varun Singh.

Ravikumar, who was the first person to reach the accident spot, had told IANS that except for two people the bodies of all other soldiers were burnt.

The black box can reveal the data about the helicopter's final flight situation and other aspects.

Further forensic examination of the remains of the chopper can also reveal if there were external causes for the accident.

In addition, Group Captain Varun Singh, the Directing Staff at the Defence Services Staff College in Wellington, Tamil Nadu, and the lone survivor of the ill-fated chopper, can also provide firsthand information on the flight.

On Wednesday, the IAF helicopter with 14 people on board, including General Rawat and his wife, took off from Sulur air base and crashed minutes before it was supposed to land at Coonoor. IANS