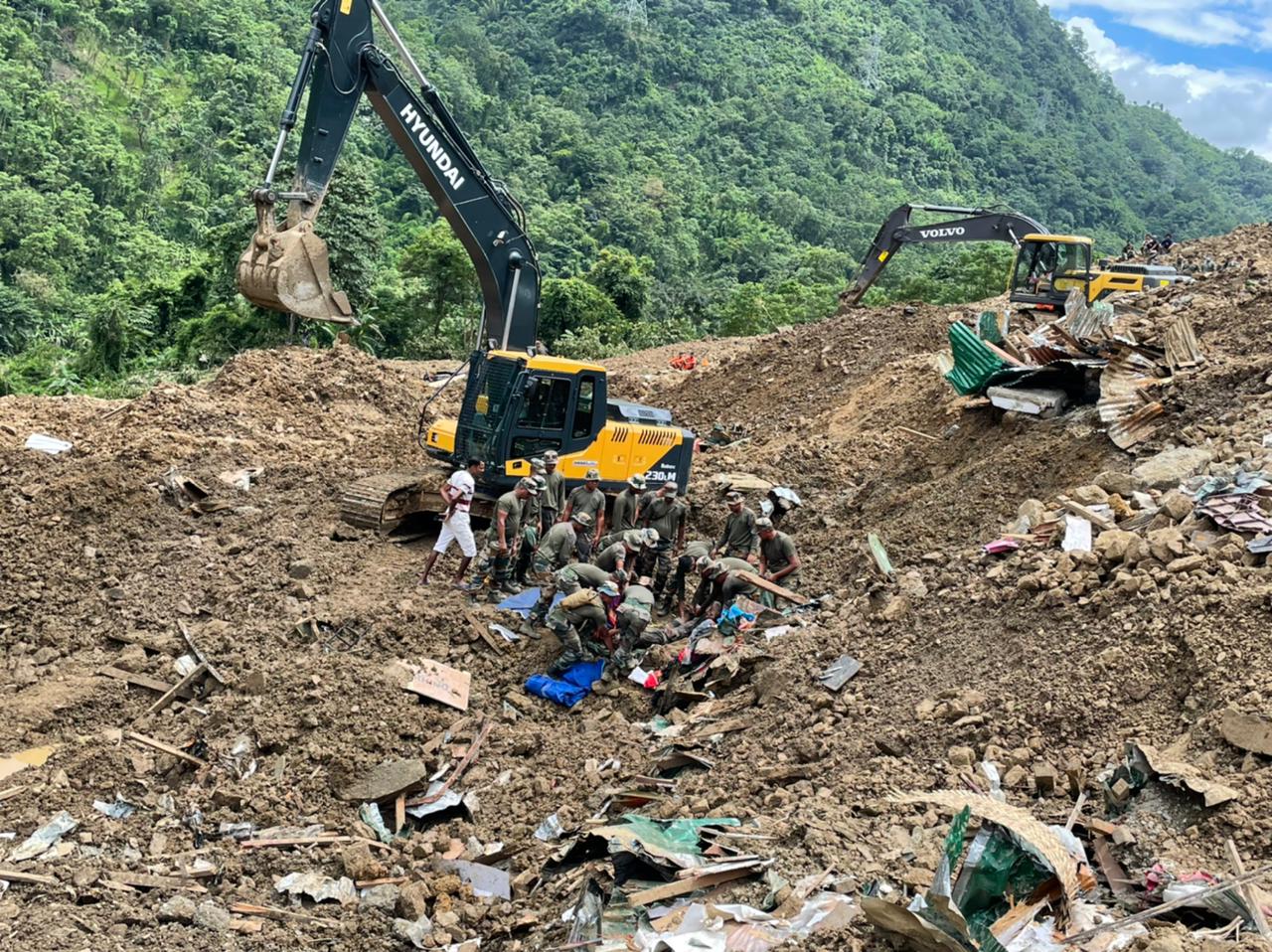 Rescue operation under way after a massive landslide hit the Tupul railway construction camp in Noney district of Manipur. Photo: The Indian Army

In what is emerging as a major tragedy, twelve more bodies, including that of eight Army troopers and four civilians, were recovered on Friday from the debris of a massive landslide in Noney district in Manipur, taking the death toll to twenty.

On the night intervening June 29 and June 30, eight persons, including seven Army soldiers and one civilian, were killed after an Army post in Noney district, Manipur, was hit by a landslide.

As of now, 44 persons, including 15 soldiers and 29 railway officials and civilian labourers, are still missing. The number of those missing has been revised upwards over yesterday’s figures.

Hopes of finding more survivors is bleak but has not diminished. A ‘thorough wall radar’ is being inducted by air to detect the presence of those buried under the debris. A search and rescue dog has also been inducted.

Yesterday, 13 soldiers and five civilian labourers were rescued alive from under the rubble. Some of them were injured. The remote post, manned by the 107 Territorial Army comprising troops of the 11 Gorkha Rifles, was to provide security to an under-construction mega rail line from Jiribam to Imphal.

A search operation by the Indian Army, Assam Rifles, Territorial Army, SDRF and NDRF continues at the incident site at Tupul, Manipur. Ten columns have been pressed into the search operation. A synergised and joint operational task force is coordinating the efforts to remove the mud and boulders.

Mortal remains of the Territorial Army personnel are being sent to respective home stations with full military honours.

Eastern Army Commander Lt  Gen RP Kalita on Friday morning met the six injured Territorial Army personnel who were initially evacuated to the Liemakong Military Hospital on June 30  and are now being provided medical aid at the Assam Rifles Hospital at Mantripukhri.

Shocked to know that nine jawans of the Darjeeling hills ( 107 Territorial Army unit)are among the casualties in the Manipur landslide. Deeply mourn the demises and extend
all solidarity and support to the next of kin.Heartfelt condolences.