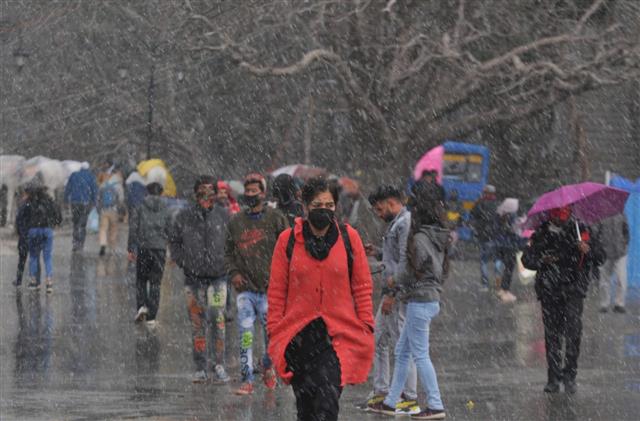 Commuters walk with umbrellas during snowfall in Shimla on Tuesday. Photo: Amit Kanwar

Defying expected trends of a La Nina year, day temperatures in Northwest India are recording way above the normal in February this year quite unlike the “severe and extended winter” predicted by meteorologists at the beginning of the season last year.

As on date, the day temperatures are “markedly above normal (5.1°C or more)” at many places over Jammu and Kashmir, Ladakh, Gilgit-Baltistan and Muzaffarabad and West Rajasthan and “appreciably above normal (3.1°C to 5.0°C)” over Himachal Pradesh, Uttarakhand, and East Rajasthan and also some parts of Haryana, Chandigarh, and Delhi.

Minimum or night temperatures too are ruling “markedly above normal (5.1°C or more)” in parts of Punjab and West Rajasthan while many regions of the Northwest (including Hill States) and the Central India are “appreciably and above normal (3.1°C to 5.0°C)”. Though in plains yesterday the lowest minimum temperature of 6.6°C was recorded from Karnal.

Mahesh Palawat of Skymet attributes the “increase in maximum temperatures since the beginning of February” to “lesser and feeble Western Disturbances”.

“Usually in the Delhi-NCR the mercury touches the 30°C mark in the latter part of February. However, this year it has happened in the first half. There is no specific reason apart from the fact that the season has seen fewer and reduced intensity WDs, which mostly caused lighter and moderate snow and rains. Only when there is a high intensity WD that icy cold winds are generated. One can only blame climate change”.

Meanwhile, a fresh WD is likely to affect the Western Himalayan Region from night of February 19. Under its influence “isolated to scattered light rainfall/snowfall is likely over WHR,” according to the IMD.

“However, the temperatures are not expected to drop drastically, that is certain. The February 19/20 WD will not be severe, so the winters are on the way out. A harsher and extended winter was expected this season due to various reasons, including the prevailing La Nina,” he said.