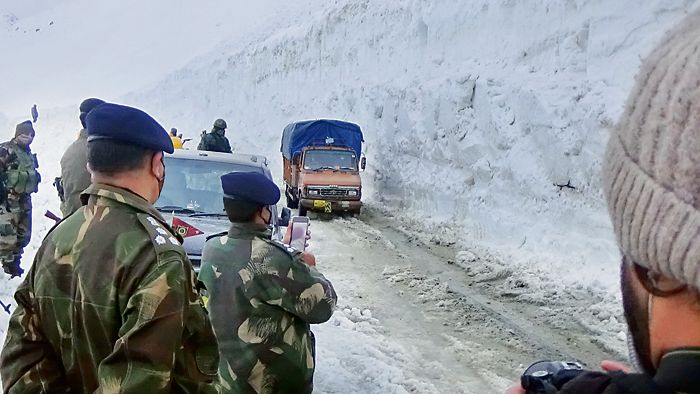 After several spells of snow in March and April, the high Himalayan passes on the two road routes to Ladakh have reopened, facilitating the movement of tonnes of supplies like rations, fuel and equipment needed by the armed forces to the plateau.

The Srinagar-Kargil-Leh route across the 11,500-foot-high Zoji La had opened in mid-February but fresh snow and avalanches left it unusable. The Border Roads Organisation (BRO) re-established connectivity on Wednesday as ten trucks, carrying essential fresh supplies, traversed the Zoji La towards Kargil.

The original plan was to open the pass for Army and civil traffic by February-end or early March. However, continuous bad weather conditions, poor visibility and heavy snowfall resulted in triggering of avalanches, thus delaying the opening.

The 425-km Manali-Leh route had opened in March-end, but intermittent snow had led to its closure. A couple of hundred vehicles passed through the stretch for 25 days or so till the route got blocked with a fresh spell of snowfall.

The road routes to Ladakh are important as Indian and Chinese troops are locked in a military standoff. Before the LAC crisis, the two roads normally opened by April-end or early May depending upon the snow melt. Snow-cutters are deployed to open the route. The window to ferry material by the two road routes — via Manali and Srinagar — is open till October.

Once the passes close, the only option is to fly out supplies from the logistics hub in Chandigarh. But even these flights have time restrictions. Planes have to fly out of Leh before noon as a rise in temperature coupled with rarefied oxygen affect engine performance.