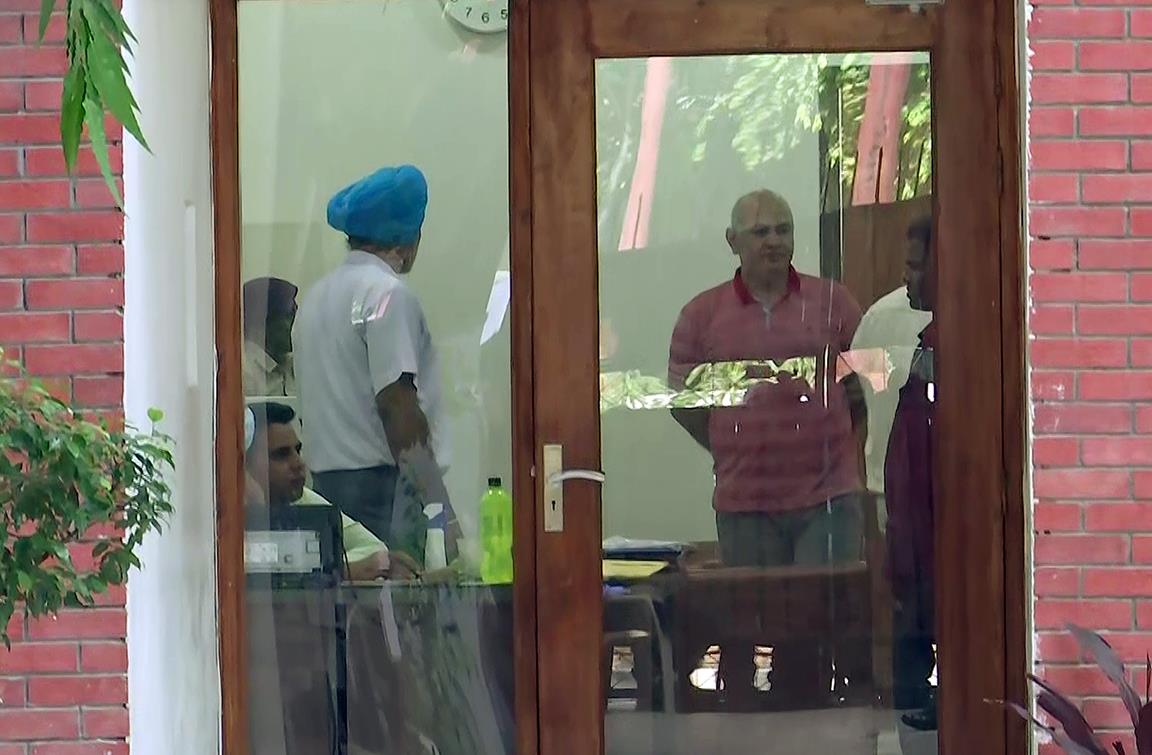 Delhi Deputy CM Manish Sisodia at his residence during the 14-hr raid. ANI

The CBI today conducted raids at the official residences of Delhi Deputy Chief Minister Manish Sisodia and IAS officer Arava Gopi Krishna, besides 29 other locations in seven states and union territories, after registering an FIR to probe alleged irregularities in formulating and executing the city government’s excise policy, which was brought in November last year.

The agency has named 15 persons, including Sisodia, in its FIR, lodged on August 17.

Besides Sisodia, other public servants who have been named in the FIR as accused include then Excise Commissioner Arava Gopi Krishna, then Deputy Excise Commissioner Anand Kumar Tiwari and Assistant Excise Commissioner Pankaj Bhatnagar, besides nine businessmen and two companies. In a statement, the CBI said, “Searches are being conducted at 31 locations, including Delhi, Gurugram, Chandigarh, Mumbai, Hyderabad, Lucknow and Bengaluru, which have led to the recovery of incriminating documents, articles and digital records.”

Officials in the CBI said the Deputy Chief Minister and other accused in the case would soon be summoned for questioning and those who failed to cooperate in the investigation might be arrested.

Earlier it was Modi vs who. Now, it is Modi vs Kejriwal. Delhi CM is an alternative to PM. Raghav Chadha, Rajya Sabha member

Sisodia reversed the excise policy the day the probe was given to the CBI. Why?

The story is based on impartial and on-the-ground reporting: NYT

In his first reaction to the raids, Sisodia took to Twitter and wrote saying that he welcomed the CBI and asserted that the truth would come out. He said these people were troubled because of the excellent work done by the Delhi Government in the health and education sectors.

“That is why ministers of both departments are targeted to stop us from the good work in the health and education sectors,” he said referring to the arrest of Health Minister Satyendar Jain under criminal provisions of the Prevention of Money Laundering Act (PMLA).

Delhi Chief Minister Arvind Kejriwal said the CBI raid at his junior colleague’s house was the result of his good performance, which is being appreciated globally. “The day Delhi’s education model was appreciated and Manish Sisodia’s photo appeared on the front page of the New York Times, the Centre sent the CBI at the residence of Manish. The CBI is welcome. Will extend full cooperation. Earlier also there were raids and a probe. Nothing came out. Nothing will come out now also,” Arvind Kejriwal said.

AAP Rajya Sabha member Raghav Chadha said, “Earlier it was “Modi vs who”, today it is “Modi vs Kejriwal”, Kejriwal is an alternative to Prime Minister Modi.”

Delhi Congress leader Alka Lamba said Manish Sisodia should face the action by the probe agency instead of “running away” to the cool climes of Himachal Pradesh. She also claimed that the “corrupt face” of the self-acclaimed “truly honest” minister of AAP today stood exposed.

Allegations against him, 14 others