Delhi Police receives over 2,000 PCR calls about bursting of crackers on Diwali night 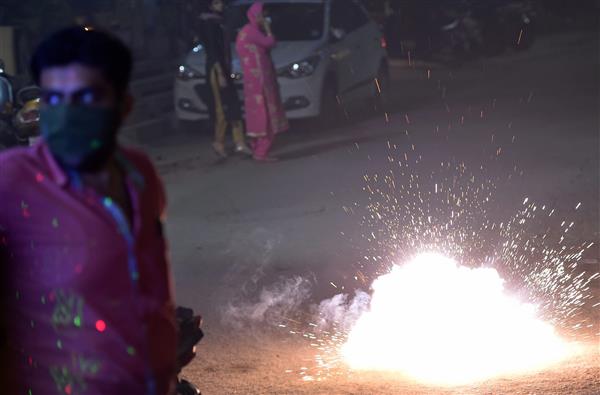 People burst firecrackers during Diwali celebrations in New Delhi on November 14, 2020, despite a ban. PTI photo

The Delhi Police received over 2,000 PCR calls from people on Diwali night complaining about the bursting of firecrackers whose use or sale has been banned in the city owing to rising COVID-19 cases and air pollution, officials said.

They also said over 1,300 kilogram of crackers were seized.

Bursting of firecrackers could be heard across Delhi and its neighbouring areas on Diwali night even though a ban was imposed on its sale and use in the national capital region by the National Green Tribunal (NGT) till November 30 midnight. The Delhi government too had earlier this month imposed a total ban on all kinds of fireworks till November 30.

A senior police official said they received about 2,100 PCR calls from people complaining about firecrackers being burst in their neigbhourhoods.

“We received 2, 100 PCR calls on Diwali night alone. Most of these calls regarding the bursting of firecrackers were received from Southwest, Dwarka and Northwest parts of Delhi. Such calls were received between 8.30 pm to 10.30 pm,” he said.

According to data shared by the Delhi Police, 1,206 cases including ‘kalandras’ (formal notices) were registered in connection with the sale and use of firecrackers on Diwali night.

The total number of people arrested, including those on Diwali alone, is 850, and a total of 1,314.42 kg of firecrackers were seized on Diwali, the official said.