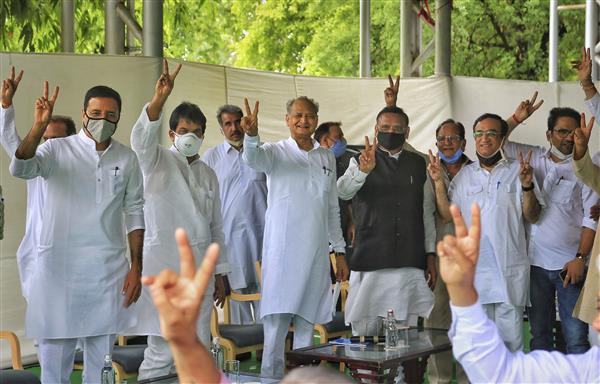 In signs of comfort for the Ashok Gehlot led Congress government in Rajasthan, the legislature party today passed a resolution supporting the CM and demanding disciplinary action against leaders found indulging in anti party activities.

The resolution is learnt to have the support of 106 MLAs even though rebel Sachin Pilot’s camp contested Gehlot’s claim and with Pilot still incommunicado despite top Congress leaders Rahul Gandhi, Ahmed Patel, Priyanka Vadra, P Chidambaram, KC Venugopal said to be engaged in placating the deputy CM.

The resolution passed by CLP in the meeting concluded a while ago condemned the BJP for attempting to destabilise the Congress government in the state and expressed full support for the Gehlot led government in signs that Gehlot may have passed the first test. The BJP however dared Gehlot to prove majority in the assembly.

Read also: Rajasthan imbroglio: BJP plays ‘wait and watch’ in what appears to be a ‘win-win situation' either way

The political tug-of-war in Rajasthan

The CLP resolution categorically demanded action against CLP members and leaders found undermining congress interests in an overt or covert manner, in clear but unstated reference to Pilot and his camp.

The top Congress leadership has meanwhile decided to keep doors for Pilot open with party media chief Randeep Surjewala inviting him to come back and talk to the high command about his concerns.

The Congress is willing to go an extra mile to pacify Pilot even though the Rajasthan CLP resolution takes a contradictory stand by seeking action against leaders who rebelled and harmed the party which is a reference to Pilot.

Pilot meanwhile is still silent and hasn’t spoken after Gehlot claimed 106 MLAs were with him.

Pilot has been in touch with BJP but with his MLA support dwindling it is unclear what bargaining power he might have with the saffron party.

Congress leaders believe Pilot overestimated his strength and may need to eat a humble pie.

Pilot’s camp is yet to reveal its plan though and is playing hard ball with Congress even after the CLP resolution signed by majority MLAs.

Gehlot has meanwhile herded his MLAs to a resort.