This comes a day after he targets the saffron party and the RSS, asking why they are not chanting 'Jai Sri Ram' and 'Hey Ram' 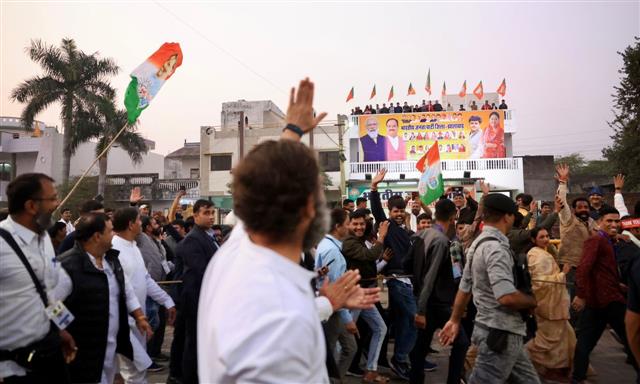 Rahul Gandhi at the Bharat Jodo Yatra in Rajasthan.

Congress leader Rahul Gandhi began his yatra on Tuesday morning on a rather interesting note, giving flying kisses to people who gathered at the BJP Jhalawar office's rooftop to catch a glimpse of the march.

This comes a day after he targeted the saffron party and the RSS, asking why they were not chanting 'Jai Sri Ram' and 'Hey Ram'.

The yatra resumed from Khel Sankul, where Gandhi had stopped on Monday night, and crossed Jhalawar city in the morning.

After covering approximately 12km, the yatra is scheduled to reach Devarighata at around 10am.

After lunch, it will resume from Suket at 3.30pm. The night stay has been planned at Moru Kalan Khel Maidan here.

Even as Gandhi is taking out his yatra in Rajasthan, the party high command appointed senior Punjab Congress leader Sukhjinder Singh Randhawa as the state's in-charge after Ajay Maken tendered his resignation from the post.