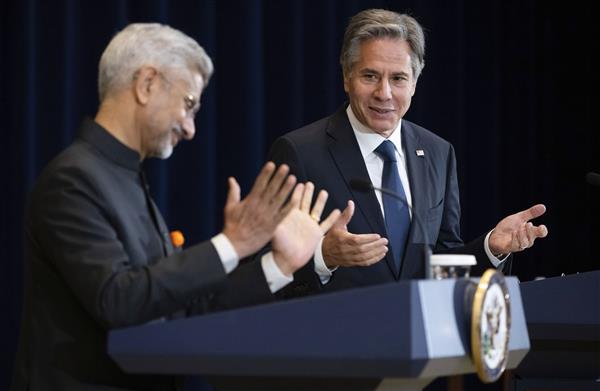 External Affairs Minister S Jaishankar and US Secretary of State Antony Blinken at a press meet in Washington on Tuesday. AP/PTI

India expressed its keenness to work with the US on a wide range of issues to "help shape the world" and pressed for more coordination in the Indian subcontinent. But it drew red lines on its diversified military relationship and imposing a price cap on Russian oil.

Soaring Oil prices breaking our back

You have to understand, the energy markets are under great stress and the prices must soften. Price of oil is breaking our back. — S Jaishankar, External Affairs Minister

Alliance with India most consequential

Partnership between the US and India is one of the most consequential in the world... F-16 package to Pakistan is our obligation to check terror threats. — Antony Blinken, US Secretary of State

Manage ties with India: US to Pak

The US discussed with Pakistan the importance of having a “responsible relationship” with India, Blinken has said while Washington faces New Delhi’s criticism over its move to give Pakistan F-16 package.

Addressing a joint press conference after meeting US Secretary of State Antony Blinken in Washington on Tuesday, External Affairs Minister S Jaishankar said, "We engaged in all domains. We discussed political coordination and exchanged assessments on the regional situation."

However, Jaishankar was unwilling to endorse the G-7 proposal for a price cap on Russian oil on which he had a brief discussion with Binken. "You have to understand in the last few months, the energy markets have been under great stress and the prices must soften. Price of oil is breaking our back. We will judge how it affects us and the global south," he said. Asked about an impact on supplies of spares for Russian equipment, he said there had been no particular problem in this respect. "We have a tradition of multi-sourcing," he said on the import of defence equipment, pointing to Indian acquisitions from France and Israel as well. The two sides also did not see eye to eye on the first US arms package to Pakistan in four years.

Blinken argued it bolstered Pakistan's capability to counter terrorist threats in the region and would benefit all neighbouring countries. Jaishankar has been caustic on the F-16 modernisation package for Pakistan, arguing that it has been of benefit to neither country.

On Ukraine, Blinken spoke appreciatively of PM Modi's "this is not the era of war" observation made to Russian President Vladimir Putin and said, “We could not agree more.” Jaishankar too recalled that India's consistent stand since the hostilities broke out was to appeal for talks. But there appeared to be no meeting point on jointly countering Russia.

Jaishankar met Blinken after he had asked the US to review its rapidly warming relationship with Pakistan and criticised the Biden administration's authorisation of $450 million for upgrading Islamabad's F-16 fleet. Jaishankar's meeting with Blinken came a day after he met Pakistan Foreign Minister Bilawal Bhutto Zardari and advised him to better manage ties with India.

Jaishankar wrapped up his Washington visit by touching on all nodal points of the bilateral relationship - security, trade and investment and foreign policy. On Monday night, he met the US Defence Secretary Austin Lloyd and Commerce Secretary Gina Raimondo.

Given an "enhanced honour ceremony" at the Pentagon, Jaishankar and Lloyd later discussed expanding information-sharing and logistics cooperation to drive deeper operational coordination between the US and Indian militaries.