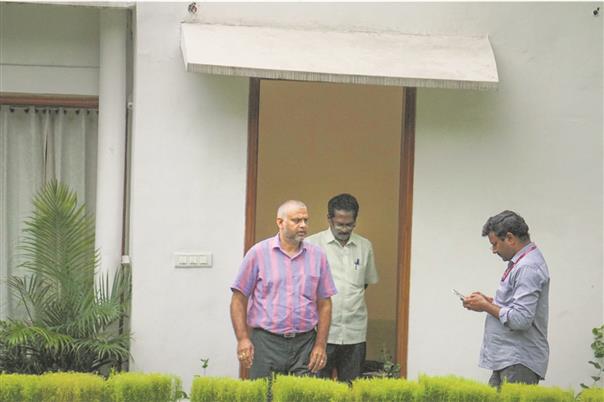 Enforcement Directorate officials during a raid in New Delhi on Friday. PTI

The Enforcement Directorate (ED) today conducted fresh raids at 40 locations across the country as part of a money laundering investigation into alleged irregularities in the now scrapped Delhi excise policy.

The Delhi Anti-Corruption Branch on Friday arrested AAP MLA Amanatullah Khan in connection with a graft case, officials said. The ACB is probing alleged irregularities in the recruitment in the Delhi Waqf Board, which Khan heads as the chairman. The ACB on Friday conducted searches at Khan’s house and other premises linked to him and seized Rs 24 lakh as well as two unlicensed weapons, the officials said. PTI

The ED officials said the raids were being conducted on the premises of those linked to liquor business in Nellore and some other cities in Andhra Pradesh, Telangana, Karnataka, Tamil Nadu and Delhi-NCR. The agency teams were escorted by the police and personnel of Central Armed Police Forces, they said.

This is the second round of raids by the ED in the case.

The policy, which was being implemented since November 17, 2021, was scrapped by the Kejriwal government this July following a CBI probe recommended by Delhi L-G VK Saxena into its implementation. The ED case stems from a CBI FIR in which Delhi Deputy Chief Minister Manish Sisodia and some Delhi Government bureaucrats have been named as accused.

Meanwhile, agency officials today questioned AAP leader and minister in the Delhi Government Satyendar Jain, lodged in the Tihar Jail, in connection with the case and recorded his statement.