Rao, 82, is currently undergoing treatment at the Mumbai-based Nanavati Hospital 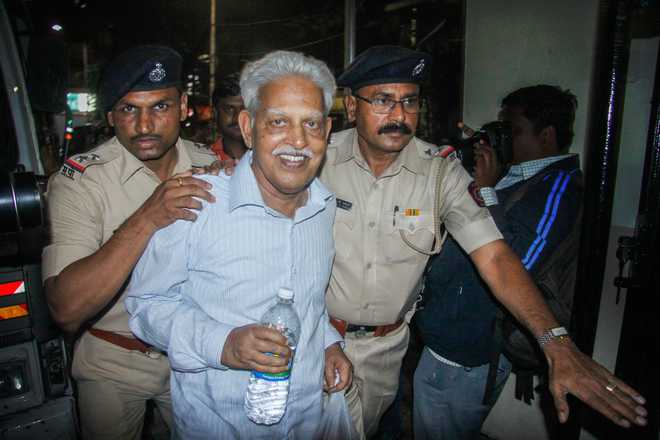 The Bombay High Court on Monday granted interim bail for six months on medical grounds to ailing poet and activist Varavara Rao, an accused in the Elgar Parishad-Maoist links case.

The court said it could not be a “mute spectator” and permit 82-year-old Rao’s health condition to deteriorate in custody.

A bench of Justices S S Shinde and Manish Pitale said there existed no doubt that given his current medical condition, Rao would face “acceleration and intensification of ailments” if he continued to remain in custody.

It noted that medical facilities at the Taloja prison’s hospital in neighbouring Navi Mumbai were inadequate.

Rao is currently admitted to Nanavati Hospital, a private medical facility in Mumbai.

He has been in custody since August 28, 2018, awaiting trial in the case, which is being probed by the National Investigation Agency (NIA).

The bench granted bail to Rao for six months, while directing him to stay within the jurisdiction of the NIA court in the city during this period.

Rao will be discharged from the hospital depending on his health condition and then released on bail, as per the HC.

While granting Rao bail on medical grounds, the HC dismissed NIA’s argument that he was not entitled to relief on humanitarian grounds.

However, the court imposed a host of stringent conditions on his bail, including prohibiting him from establishing contact with his co-accused in the case.

It also dismissed the Maharashtra government’s submission that after discharge from the Nanavati Hospital, Rao would be shifted to the prison ward of the state-run J J Hospital in Mumbai.

“We are of the opinion that this court, as a constitutional court, cannot be a mute spectator to the undertrial (Rao) being sent to prison and then togovernment hospitals where his health deteriorates further.

“To be ultimately shifted to private superspeciality hospitals, upon intervention of courts...,” the HC said in its 92-page judgment.

The bench said given the material on record, it had concluded that sending Rao back to the Taloja central prison where he was lodged as an undertrial, before he was shifted to the Nanavati Hospital, would “certainly endanger his life” and breach his fundamental right to health and life.

The HC noted that in the past, Rao’s family had to approach court to get information on his health condition while in prison.

It also observed that while Rao continued to suffer from multiple ailments in the prison and even contracted the COVID-19 infection, he was shifted to the Nanavati Hospital only after the HC’s intervention.

“The undertrial’s (Rao’s) repeated admissions to government facilities which have proved to be inadequate (in the past), would lead to the undertrial or his relatives repeatedly approaching courts for appropriate directions for dealing with deterioration of his health if he is put back in custody,” the bench said.

“In the said process, possibility of casualty cannot beruled out,” the court observed.

It said Rao’s medical reports in the past pointed out that he suffered from several serious and age-related ailments. Some of the reports had also mentioned symptoms of dementia.

Therefore, his family will be able to provide the best care for him, the court said.

In its judgment, the HC also referred to the submission of Rao’s counsel, senior advocate Indira Jaising, on how long Rao was likely to live and what wouldcontinued incarceration mean for someone who was 82 years’ old.

“How much life of the undertrial now remains also assumes some significance,” the high court said.

“Admittedly, the undertrial is about 82 years old, suffering from health ailments noted above, requiring support from his immediate relatives in order to have some semblance of normalcy during whatever period of life now remains,” it said.

The bench, however, also took note of the NIA’s apprehension that letting Rao go back home to Hyderabad on bail might result in his or his associates resuming “nefarious activities”.

Thus, the HC directed him to stay in Mumbai while on bail, make fortnightly WhatsApp video calls to the nearest Mumbai police station, and prohibited large gatherings or large group of visitors from meeting Rao while he is out in bail.

“Sending the undertrial back to where he belongs, is fraught with the risk of his presence being used by those allegedly associated with him to seek to revive the aforesaid nefarious activities,” the court said while imposing various conditions in his bail.

The HC also prohibited Rao from indulging in activities similar to those that led to the FIR against him, and from making any national or international calls to his co-accused or to those engaged in “similar activities”.

It also prohibited Rao from making any statements related to the case before print or electronic media.

“With all humility at our command, keeping in view human consideration, the well recognised fundamental rights of theundertrial to have quality medical aid for serious ailments suffered by him, advanced age, inadequate facilities in the hospital attached to the Taloja Central Prison, we are of the opinion that this is a genuine and fit case to grant relief,” the court said.

“Or else, we will be abdicating our constitutional duty and function as a protector of human rights and right to health covered under ghe right to life guaranteed by Article 21 of the Constitution of India,” it said.

The court also directed Rao to either surrender before the NIA court or to apply to the HC for extension of bail once the six-month period is over.

It also dismissed the NIA counsel Additional Solicitor General Anil Singh’s request for a stay on the bail order for three weeks.

The HC said once the Nanavati Hospital had declared Rao fit to be discharged, and once the court had granted him bail, it could not send him back to the Taloja prison.

The court also directed Rao to furnish a personal bond of Rs 50,000 and two sureties of the like amount.

On February 1, the HC closed all arguments in the case and reserved its verdict on Rao’s medical bail plea and his wife Hemlatha’s writ petition that alleged a breach of his fundamental rights due to inadequate medical care and his continued incarceration.

The case pertains to alleged inflammatory speeches made at the Elgar Parishad conclave held in Pune on December 31, 2017, which, the police claimed, triggered violence the next day near the Koregaon-Bhima war memorial located on the outskirts of the western Maharashtra city.

The police have also claimed that the conclave was organised by people with alleged Maoist links. PTI