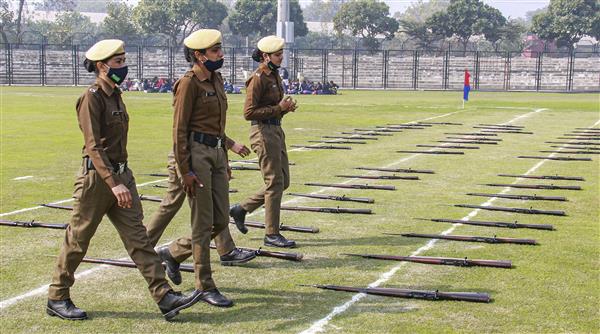 Security arrangements have also been tightened at the border areas in view of a proposed tractor parade by the farmers agitating against the Centre's new farm laws on January 26. PTI photo

Ahead of Republic Day celebrations, the Delhi Police have issued an advisory, saying people will be allowed to watch the parade at Rajpath strictly on the production of an invitation card or a ticket.

The police also said that those below 15 years of age will not be allowed at the event.

There will be no free entry to the programme this year, the police said.

The national capital has been brought under an unprecedented ground-to-air security cover, with thousands of armed personnel keeping a tight vigil in view of the Republic day celebrations scheduled on January 26. Patrolling has been intensified in the busy market areas of the city.

Security arrangements have also been tightened at the border areas in view of a proposed tractor parade by the farmers agitating against the Centre's new farm laws on January 26.

Like the Independence Day function last year, all chairs in the enclosures at the Republic Day event at Rajpath will be placed following social-distancing norms in view of the COVID-19 pandemic. The crowd size has been brought down to 25,000 this year from around 1.25 lakh last year. The number of enclosures has also been halved to just 19. PTI