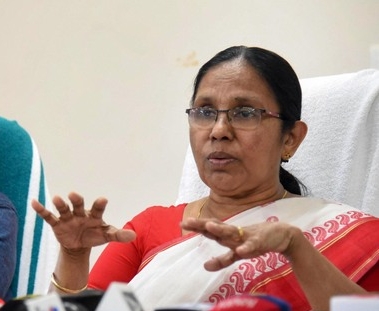 Days after leading the ruling LDF to a stupendous electoral victory, CPM veteran Pinarayi Vijayan was on Tuesday elected its Parliamentary party leader for a second term as Chief Minister, but the omission of “rockstar” health minister KK Shailaja from the new cabinet sparked a debate.

Having won international accolades for her deft handling of the first wave of Covid-19 in Kerala after it reported India’s first case in 2020, Shailaja’s surprise omission drew instant comparisons with late KR Gowri Amma, the firebrand Marxist who was once tipped to head the state, but never did.

However, Shailaja said she was not disappointed at being denied berth in the new cabinet. “There is no need to be emotional. I became the minister earlier because of the party’s decision. I have absolute satisfaction in what I have done. I am confident that the new team can perform better than me,” she added.

“Not the individual but the system is showcasing the fight against the pandemic,” the leader added.

She was, however, entrusted with the position of party whip, a CPM statement said here, even as the party took the position that all members except the Chief Minister should be fresh faces in the new cabinet.

Among the fresh faces is Vijayan’s son-in-law PA Mohammed Riyas. The state committee of the Marxist party nominated 11 freshers, including two women as its ministers in the new government, which would be sworn in on May 20.

The state committee, which met at its headquarters AKG Centre, elected Vijayan to lead the party, the statement said.

Though it was almost sure that no ministers in the previous Vijayan government would find a place in his new cabinet, Shailaja was expected to be given an exemption by the party.

She had won the polls with the highest margin of 60,963 votes from Mattannur in Kannur. The media, during the election, had even projected her as the first woman chief minister of the state in future.

A retired school teacher, she had done a commendable job in containing the Covid surge in the state last year and also during the Nipah virus outbreak in 2018 and 2019.

Though critics alleged that Shailaja was sidelined, the CPM took the position that all ministers except the CM should be fresh faces in the new cabinet. So had been the case with TM Thomas Isaac, Finance Minister in the outgoing cabinet, among others who had not been given a chance as they were elected twice consecutively, party sources said. — PTI