Experts explain what is causing heavy rains that killed dozens in Uttarakhand, Kerala over few days 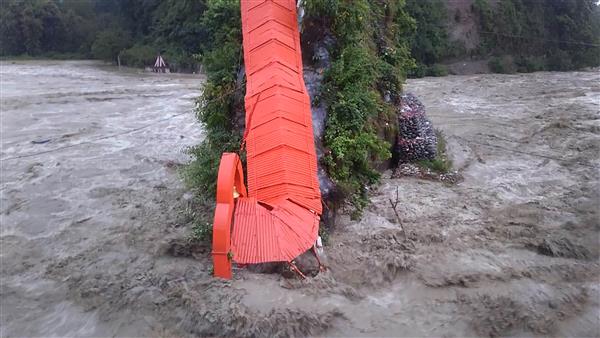 The gate of the Garjiya Devi temple submerges in water after the water level of the Kosi river rose due to heavy rains, in Ramnagar, on Tuesday, October 19, 2021. PTI

A confluence of cyclonic storms forming in the Bay of Bengal and the Arabian Sea is among the biggest reasons behind heavy rains in different parts of the country over the past few days that have claimed dozens of lives in Uttarakhand, Kerala and other states, experts said on Tuesday.

Climate experts also warn the intensity of rains in Kerala and Uttarakhand is “alarming” and must draw immediate attention towards “climate emergency”.

“The latest rains in Kerala are a result of a normal climatic event called retreating monsoon that happens every year. However, the intensity of rains there and in Uttarakhand is alarming and must draw our attention to the severity of climate emergency.

“We have seen a steady rise in the number of adverse climatic events over the past few years and as a tropical country, I believe it is time India takes solid steps to help meet the climate targets as events since the past few years and this trend seems to be getting worsened,” said Kamal Narayan Omer, CEO, Integrated Health and Wellbeing Council (IHW Council).

Ishteyaque Ahmed, Senior Climate Campaigner, Greenpeace India, said these rains were a consequence of the cyclonic storms from the east and the west and can lead to huge environmental losses and derail food security of the country.

“Rising oceanic temperatures can strengthen otherwise weak cyclones and make them deadlier than expected. India is facing this crisis from three sides. In the last few days cyclonic storms are continuously forming in the Bay of Bengal as well as in the Arabian Sea.

“The confluence of such eastern and western storms is among the biggest causes of such disastrous rains in different parts of the country. These untimely erratic rains, responsible for big human and environmental losses can derail the food and nutritional security initiatives of the country, which is already at the brink of a major food and nutrition crisis,” Ahmed said.

He also said that more such extreme weather events can occur in the future.

“In a transitional phase, it is next to impossible to predict for the future, but seemingly rising oceanic temperatures and destruction of floral and faunal aquatic lives, more frequent and frightening extreme weather events cannot be ruled out,” he said.

According to V Vinoj, Assistant Professor, IIT Bhubaneswar, states and the country as whole need to be “climate smart”. He suggested specific warning system to be installed to tackle the climate situation better.

“It is now well-known that anthropogenic climate change will lead to extreme weather patterns. Therefore, it is now imperative that their impacts on life and property are minimised by following locally relevant adaptation measures. In parallel, efforts on mitigation efforts should be hastened so as to slow climate change.

“A specific warming system taking in to consideration the local vulnerabilities will go a long way in saving lives. In addition, adaptation measures, again taking climate resilience as the central issue will be beneficial in the long run. In summary, our country, states and cities should be climate smart,” he said.

Incessant rains have claimed at least 28 lives in Uttarakhand in the last two days, razing houses to the ground and leaving many trapped in the debris.

Nainital was cut off from the rest of the state with three roads leading to the popular tourist spot blocked due to a series of landslides.

Landslides have blocked the exits in the town and electricity, telecom and internet connectivity in Nainital district was also hit badly.

The death toll in incidents related to heavy rains, including landslides and flash floods in Kerala rose to 27 on Monday. Meanwhile, a red alert has been issued for 11 dams across Kerala as water levels have breached the danger mark in several areas.

Heavy rains are again expected in the state between October 20 and 24. PTI