Bills replacing ordinances to extend the service tenures of CBI, ED chiefs to up to 5 years are among 36 draft laws listed for the session which will have 19 sittings over 25 days 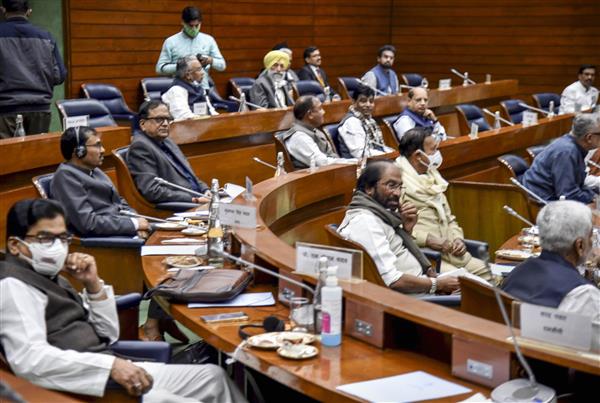 Leaders attend an all-party meeting ahead of the Winter Session of the Parliament, in New Delhi, on Sunday, November 28, 2021. PTI

Bills to repeal three controversial farm laws, ban private cryptocurrencies and extend the service tenures of CBI and Enforcement Directorate chiefs will top the government’s legislative agenda in the winter session of Parliament starting on Monday.

In line with prime minister Narendra Modi’s announcement to withdraw the agricultural reform legislations passed by both houses in September last year, the government has listed The Farm Laws Repeal Bill 2021 for passage in the Lok Sabha on the very first day of the session tomorrow.

The bill may also be brought up in Rajya Sabha on Monday as supplementary agenda.

The joint opposition, in a meeting called by the government today to discuss the parliamentary discussion items, demanded that farm laws be repealed on priority and a law to guarantee minimum support price be also brought in the session.

Compensation for the families of 700 farmers who died during the course of the yearlong agitation triggered by farm laws was another demand of the united opposition at the government meeting chaired by defence minister and leader of Lok Sabha Rajnath Singh in the Parliament House Complex this morning.

“The meeting today was very constructive. Important issues were flagged by the opposition which raised the need for greater discussion in Parliament. We also want a healthy discussion in both houses,” Rajnath Singh said after the meeting with parliamentary affairs minister Pralhad Joshi assuring that the government was ready to discuss any issue within rules and procedures.

“We sought opposition support for smooth functioning of Parliament,” said Joshi after the monsoon session was washed out over a deadlock on the Pegasus snooping issue.

Prime Minister Narendra Modi did not attend the meeting today with the opposition leaders voicing disappointment at the PM’s absence.

The government however clarified that the PM had prior engagements which kept him away.

At the meeting attended by 30 parties, leader of opposition in Rajya Sabha Mallikarjun Kharge demanded discussion on Covid preparations, Rs 4 lakh compensation for each family that has lost a ward to Covid, debate on Chinese aggression, inflation and fuel prices rise, unemployment, Women’s reservation bill and Pegasus snooping.

There was consensus among opposition leaders on priority repeal of farm laws and legal MSP apart from a discussion on inflation, joblessness, Covid management, Pegasus, with the TMC also flagging the issue or extended BSF jurisdiction in border states and the need for greater scrutiny of government bills.

“The government listened to us and said the business advisory committee of the two houses will prioritise the agenda. We had expected the PM to be present but he did not come. The opposition raised 15 to 20 demands, with farm law repeal and legal MSP our joint priority,” Kharge said.

The Aam Aadmi Party walked out of the meeting with Rajya Sabha MP Sanjay Singh saying the government did not allow him to speak.

“I wanted to raise the issue of MSP law and compensation for families of 700 farmers who have died but I was not allowed to speak,” Singh said.

The day saw a series of meetings of NDA floor leaders followed by a meeting of house leaders called by Rajya Sabha chairman M Venkaiah Naidu and another called by Lok Sabha Speaker Om Birla.

The government has for its part listed 36 bills for the session.

The cryptocurrency bill seeks to ban private crypto currencies and create a framework for the issuance of official digital currency by the RBI. The bill will however provide some exceptions to promote the underlying cryptocurrency technology and its uses.