The Farm Laws Repeal Bill 2021 was passed by both the Houses of Parliament on November 29, the first day of the Winter Session 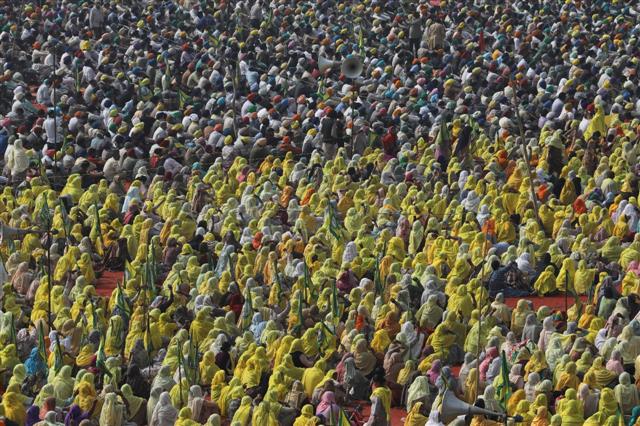 Farmers gather to mark the first anniversary of their protests on the outskirts of Delhi at Pakora Chowk near Tikri border, India, on November 26, 2021. Reuters file photo

The three controversial farm laws that provoked a yearlong agitation in Delhi’s borders stood annulled on Wednesday with President Ram Nath Kovind giving his assent to the repeal bill.

The Farm Laws Repeal Bill 2021 was passed by both the Houses of Parliament on November 29, the first day of the Winter Session days after Prime Minister Narendra Modi, speaking on Gurupurab (November 19)  assured the protesting farmers of rollback of the laws.

With the Presidential assent today, the bills have become history paving the way for the withdrawal of farmers’ protests.

The government has initiated the process of constitution of the panel which, Tomar said, will have the representatives of farm unions.

The ball is now in the court of Samyukta Kisan Morcha which will announce its next move on December 4.

The Presidential assent repeals The Farmers Empowerment and Protection Agreement on Price Assurance and Farm Services Act 2020; The Farmers Produce Trade and Commerce Promotion and Facilitation Act 2020 and The Essential Commodities Amendment Act 2020.

The government while repealing the laws defended the laws and said it was unable to convince some farmers of the benefit of the move.

The statement of reasons for The Farm Law Repeal Bill 2021 passed by Parliament on Monday read, “Even though only a small group of farmers are protesting against these laws, the government tried hard to sensitize the farmers on the importance of the laws through several meetings. Without taking away the existing mechanisms available to the farmers, new avenues were provided for trade of their produce. Besides, farmers were free to select avenues of their choice where they could get more prices for their produce without any compulsion”.

.The Repeal Bill said extensive consultations were held with various stakeholders before bringing the laws.

“The operation of the laws has been stayed by the Supreme Court. During Covid period, the farmers have worked hard to increase production and fulfill the needs of the nation. As we celebrate the 75th year of Independence—Azadi ka Amrut Mahotsav—the need of the hour is to take everyone together on the path of inclusive growth and development. In view of the above the farm laws are proposed to be repealed,” Agriculture Minister Tomar said about the Bill.