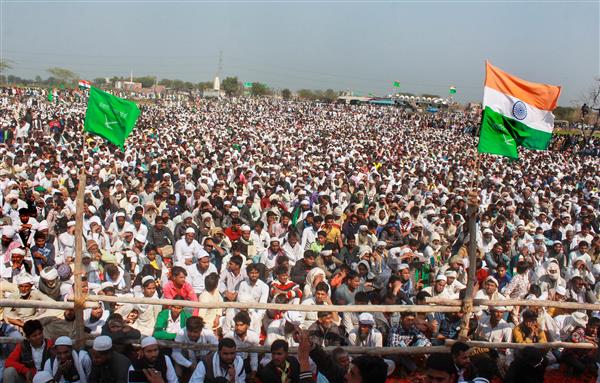 Protesting farmer unions on Saturday demanded a high-level judicial inquiry into the violence that took place during the tractor parade in Delhi on January 26 and the alleged ‘false” cases slapped on the farmers.

Addressing a press conference at the Singhu border, Samyukta Kisan Morcha leaders asked farmers who are getting police notices not to appear before the force directly and, instead, approach the legal cell constituted by the unions for any assistance.

Kuldeep Singh, a member of SKM’s legal cell, alleged that a retired judge of the Supreme Court or high court should probe the incidents to unravel the “conspiracy” behind the January 26 violence and the alleged “false cases” against the farmers.

According to SKM leaders, 16 farmers who had participated in the tractor parade are still untraceable.

Another leader Ravinder Singh said that 122 farmers had been arrested by Delhi Police in connection with 14 of the 44 FIRs, adding that SKM will provide legal and financial aid to all the arrested farmers.

The Morcha leaders claimed that “false” cases were being slapped on farmers charging them with serious offences like dacoity and attempt to murder to “harass” them.

Singh said that the Morcha will provide Rs 2,000 to every arrested farmer for spending in prison canteen.

Thousands of farmers, mostly from Punjab, Haryana and western Uttar Pradesh, have been camping at three Delhi border points, demanding a repeal of the three agri laws and a legal guarantee on minimum support price (MSP). — PTI