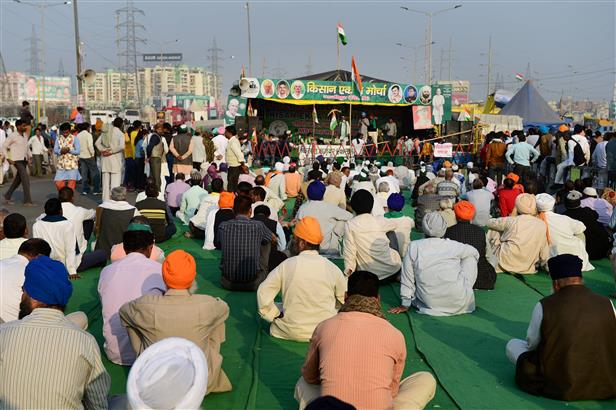 Farmers during their protest against the new farm laws, at Ghazipur border in New Delhi. — PTI

The anger of the protesting farmers has started to boil over after three months of the agitation as they are upset with the government and the police over closure of the main roads at Ghazipur border and notices sent to several protesters.

Farmer leaders held a press conference at Ghazipur border expressing displeasure over notices by the government sent to protesters for involvement in the January 26 violence.

Farmer leader Jagtar Singh Bajwa said: "The police and the central government have crossed the limits of dictatorship. The government is working to suppress the movement, there is resentment among our colleagues in the entire peasant movement."

Giving an example, Bajwa said: "A woman has got a notice, and she has works in Delhi. Just because her phone was active in the area on Republic Day, she was sent a notice for it."

"Have faith in a democratic country, stop harassing people in support of the movement."

Farmer leaders have made it clear that the people to whom notices are being sent should refuse arrest. A legal panel set up by farmers will respond to these notices.

The farmers said that a panel of 10 lawyers from Punjab is reaching the Ghazipur border by this evening which will inform the farmers about the issues related to the legal action.

Farmer leaders also expressed their displeasure at the closure of roads as they say it has been three months since they have been protesting on the roads, but they do not want to disturb the local people.

Farmers have appealed for roads to be reopened on the border. — IANS