'Will harvest crops and continue our agitation at the same time' 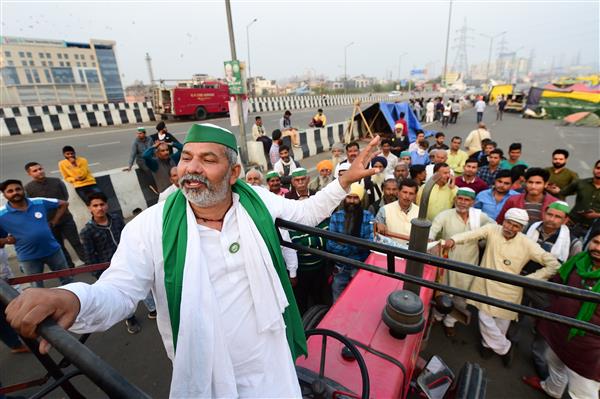 Asserting that farmers sitting on the Delhi borders will not go back to their homes till the farm laws are repealed, Bharatiya Kisan Union leader Rakesh Tikait on Thursday said “our next target is to reach Kolkata on tractors”.

“We are out to change the scenario of the country. We need one month to correct the powers-that-be. We will not return until course correction of the ruling party. Farmers of Bengal are also in crisis and we will have to fight for them as well,” Tikait said addressing a "mahapanchayat" at Kharak Poonia village of Hisar.

The new agriculture laws will ruin the economy of the small, marginal as well as big farmers, he said, adding that the private firms will take control of the fields in the guise of contract farming.

Tikait said the government should not be under the impression that the movement against the laws will end as farmers will go to their villages to harvest their crop.

“Even if you have to set your standing crop on fire, you should be prepared for it. The government should not harbour this impression that farmers will return home. We will harvest crops and continue our agitation at the same time,” he said addressing a "mahapanchayat" at Kharak Poonia village of Hisar.

"There will be no 'ghar wapsi' till then," he said.

Tikait also asked farmers to be ready for the next call of the unions spearheading the stir.

“Keep your tractors filled with fuel and facing towards Delhi's direction. You can get a call to move at any time, that will be decided by the committee (farmers unions),” he said.

Tikait said after Haryana, they will be holding panchayats in other parts of the country, including West Bengal, Karnataka, Tamil Nadu and Gujarat.

While earlier farmers had given a call for a “tractor rally” in Delhi, Tikait said the next time, they will go to the national capital with their agricultural implements.

Addressing the gathering, Haryana BKU chief Gurnam Singh Chaduni alleged, "If new agricultural laws are implemented, crops will be purchased at arbitrary prices and farmers will be forced to even sell their land."

Thousands of farmers have been protesting since late November at the Delhi borders with Haryana and Uttar Pradesh, demanding a rollback of the Farmers' Produce Trade and Commerce (Promotion and Facilitation) Act, 2020; Farmers' (Empowerment and Protection) Agreement on Price Assurance and Farm Services Act, 2020; and Essential Commodities (Amendment) Act, 2020.

The protesting farmers have expressed apprehension that these laws will pave the way for the dismantling of the minimum support price (MSP) system, leaving them at the "mercy" of big corporations.

However, the government has maintained that the new laws will bring better opportunities to farmers and introduce new technologies in agriculture. With PTI inputs