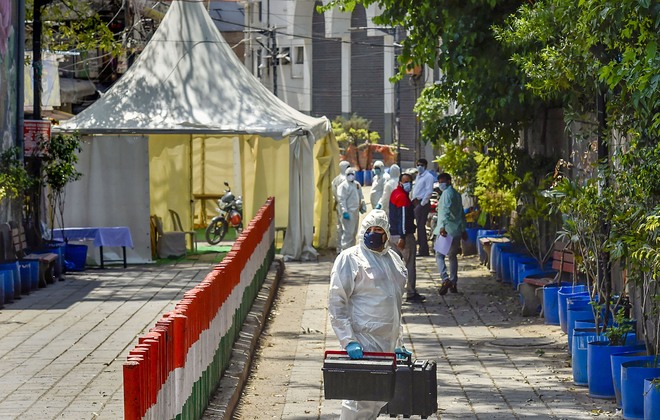 Noting that violence would be the last thing that the establishment would want to have at this juncture, senior security officials indicated that the forces on the ground have been advised to delay arresting Mohammad Saad, the Amir (head) of the Tablighi Jamaat that has emerged as a Covid-19 hotspot.

Wedding of Saad’s daughter put off

Noting that the possibility of violence by Jamaatis cannot be ruled out if Saad is arrested now, a top official in the security establishment said, “As it is, the followers Tablighi are getting increasingly aggressive in their behaviour. They are misbehaving with the medical staff and the policemen.”

Saad went into hiding, claiming he had quarantined himself, following police action at the Markaz in Nizamuddin locality.

According to intelligence sources, Saad is “using the quarantine period to muster support for himself among the Jamaatis”, who are being whipped by the police to isolation centres to avoid spread of the infection.

Intelligence sources, who are working in coordination with the police, said Saad could probably be hiding in the house of one of his supporters in the NCR region. The police forces have been asked to keep close vigil on all his possible hideouts, which includes his residence here in the Zakir Nagar locality.

However, the forces have been told not to zero in on Saad for the time being.

Saad in an audio message claimed that he had quarantined himself, as doctors have asked him to do so, but it is still not known whether he has been tested positive for Covid-19. The notice sent to Saad with 26 questions has been returned — mostly unanswered — with a statement that said that he would answer the questions after his quarantine period is over and the Markaz is opened, an official in the security establishment said.

New Delhi: A five-member team from the Forensic Science Laboratory (FSL) collected exhibits on Sunday from the Nizamuddin headquarters of the Tablighi Jamaat in south Delhi, which has emerged as a coronavirus hotspot in the country, officials said. According to FSL, Rohini Director Deepa Verma, members from the Cyber Forensics Unit, biology, chemistry and photo divisions visited the spot and collected exhibits. PTI