Both nations to step up cooperation on Af, Indo-Pacific, vaccines 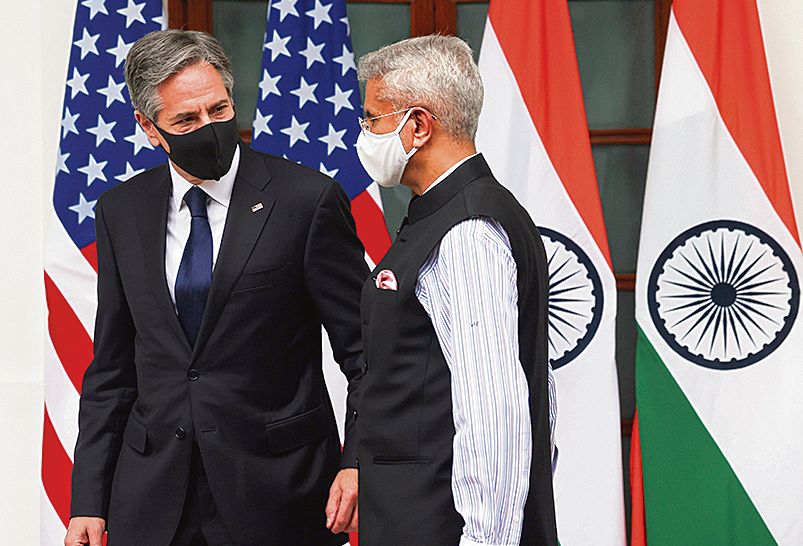 The visiting US Secretary of State Antony Blinken today said there were few relationships in the world that were more vital than the one between the US and India.

Terming the strengthening of partnership with India as one of the US’s top foreign policy priorities, Blinken also announced $25 million assistance to support vaccination efforts across India and recalled with “gratitude” the aid and assistance India provided to the US early in the pandemic.

China bristles at mention of democracy during Blinken visit to India

His discussions with External Affairs Minister S Jaishankar touched on regional concerns, multilateral institutions and global issues. Among the many issues the two looked at, Afghanistan, the Indo-Pacific and the Gulf were the most prominent. “It is essential that peace negotiations are taken seriously by all parties. Unilateral imposition of will by any party will never lead to stability nor indeed can such efforts ever acquire legitimacy,” noted Jaishankar.

On Afghanistan, Blinken told his Indian interlocutors that the US would remain engaged in the country even after the troop withdrawal as it was concerned about the Taliban advances. “There are reports of them committing atrocities in Afghanistan. It’s deeply troubling. It certainly doesn’t speak well about their intention for the country,” he said.

Blinken took up issues related to security with NSA Doval and rounded up his engagements by calling on PM Modi.

US Secy of State met civil society leaders, including Dalai Lama representative. He warned of threats to democracy, an oblique accusation slammed by China.

Jaishankar said a solution needed to be worked out through dialogue and not on the battlefield since a unilateral imposition of will could never lead to stability in Afghanistan.

In a departure from his predecessor Mike Pompeo, Blinken touched on democracy and human rights with Jaishankar telling him that “it is the moral obligation of all polities to right wrongs done historically”.

Apparently responding to criticism of the government’s actions on Kashmir and the Citizenship Amendment Act, Jaishankar pointed out at a media interaction that “many of the decisions and policies fall in that category”.

Blinken, in fact, had opened the day with a carefully curated set of civil society leaders. They included a representative of the Dalai Lama, Ngodup Dongchung, and Dr AK Merchant from the Bahai community which faces persecution in Pakistan. The US Secretary of State was careful in his responses to the media on human rights. “We recognise that every democracy starting with our own is a work in progress. When we discuss these issues, I certainly do it, from the starting point of humility. We have seen challenges our democracy has faced in the past and faces today. This is common to all democracies,” he observed.

Blinken also met NSA Ajit Doval and discussed strategic issues related to security, defence, economic and technology. He rounded up his engagements by calling on Prime Minister Narendra Modi. The leaders also discussed closer cooperation in the defence and security spheres. Jaishankar said another issue was the “expanding Indian footprint, be it in Africa, South-east Asia, Caribbean or the South-Pacific (that) has naturally broadened the shared agenda”.