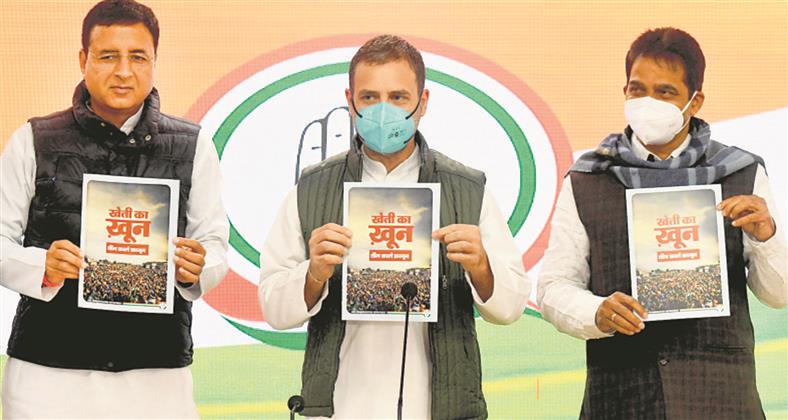 In the first official reaction to the explosive Arnab Goswami chats, the Congress today demanded a probe into the leakage of Balakot strike information to the Republic TV Editor-in-Chief and said both the giver and receiver of the official secret must be booked.

Congress leader Rahul Gandhi led the political offensive on an issue that’s set to rock the upcoming Budget Session of Parliament with the Congress and NCP already seeking a joint parliamentary committee probe.

Rahul today alleged that only five top people knew of the strike and someone from among them leaked the information.

“Sensitive information prior to the Balakot strike was given to a journalist. Even pilots get such information at the last moment. Only the top five people (PM, Defence Minister, Home Minister, IAF Chief and NSA) knew. Someone from them gave it to him. This is criminal. The process of probe must begin but it will not because the PM must have given the information,” alleged Gandhi.

He also attacked Goswami’s alleged chats where after the Pulwama terror attack he says “it is good”.

“This is a reflection of the PM’s thought process that 40 persons have died and we will now win the elections,” said Gandhi as the Congress prepared to mount an all-out offensive on the issue.

Rahul meanwhile said, “People in the government call themselves patriotic, but there is nothing patriotic about giving out official secrets about our Air Force striking Pakistan. If Goswami knew, I believe Pakistan also knew.”

Asked to respond to remarks about him by BJP president JP Nadda today, Rahul said, “Who is JP Nadda? Is he a professor? Who is he?”

New Delhi: Hitting back at Rahul Gandhi over his attack on the Narendra Modi government over farm laws and national security, the ruling BJP on Tuesday accused him and the Congress of trying to scuttle the ongoing talks between the government and farmer unions. Union Minister Prakash Javadekar said the Congress did not want the talks to succeed and had resorted to “obstructive tactics”. TNS

'Repeal of farm laws only option'

Noting that repeal of farm laws is the only way out of the current deadlock, Rahul said farmers were wiser than the PM and would not get tired out or fooled by the government.

‘China needs to be given tough message’

Rahul Gandhi said a dangerous situation was developing with respect to China, adding that India must respond with a strategic vision. “China is watching the weakness of India. Unless India gives it a clear message with a strategy, China won’t sit silent. They will exploit the situation,” he said.