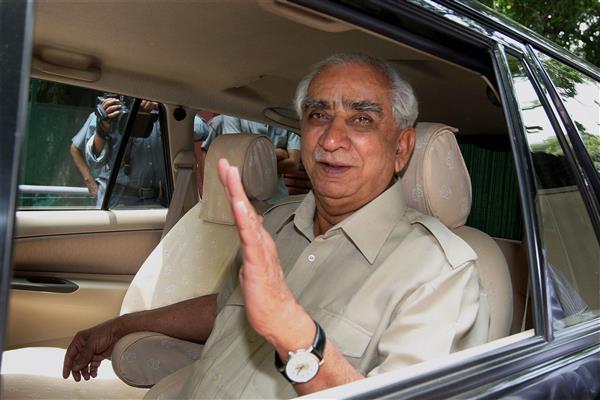 Singh, one of the founding members of the BJP and a close associate of ex-prime minister Atal Bihari Vajpayee, died here on Sunday following a long spell of illness. He was 82.

His son Manvendra Singh lit the funeral pyre amid chanting of Vedic mantras.

Singh’s family members and relatives were present during the cremation at the farm house located near a civil airport.

Singh, a former Army officer, had a fall at his home in August 2014 and was admitted to the Army Research and Referral Hospital. He was in a coma for a long spell and had been in and out of the hospital since then. He was admitted again in June this year.

"It is with profound grief that we inform about the sad demise of Hon'ble Major Jaswant Singh (Retd), former Cabinet Minister at 0655 hours on 27 September 2020. He was admitted on 25 Jun 2020 and being treated for sepsis with Multiorgan Dysfunction Syndrome and effects of Severe Head Injury old (Optd) had a Cardiac arrest this morning," the hospital said in a statement.

Despite the best efforts of specialists to resuscitate him, he could not be revived and passed away, it added.

Reacting to Singh's death, the President said the demise of the "veteran soldier, outstanding parliamentarian, exceptional leader and intellectual" was distressing.

"He combined many difficult roles with ease and equanimity. My heartfelt condolences to his family and friends," he said.

Modi said that Singh served India diligently and will be remembered for his unique perspective on matters of politics and society.

The prime minister later spoke to Singh's son Manvendra to convey his condolences.

True to his nature, Jaswant Singh fought his illness with immense courage for the last six years, Modi said.

Condoling his death, Modi said, "Jaswant Singh Ji served our nation diligently, first as a soldier and later during his long association with politics. During Atal Ji's Government, he handled crucial portfolios and left a strong mark in the worlds of finance, defence and external affairs".

In his eclectic career, Singh donned many hats -- army officer, author, Union minister, but his handling of the Kandahar hijack crisis as the then external affairs minister in 1999 was one that looms large.

Singh, considered close to Vajpayee and veteran leader L K Advani, was one of India's rare politicians to have held the portfolios of defence, external affairs, finance and the post of the deputy chairman of the planning commission, in BJP governments under Vajpayee.

He resigned his commission to pursue a political career and had a distinguished tenure in Parliament being a member of Lok Sabha and Rajya Sabha multiple times.

Singh had been associated with the BJP since its foundation in 1980. He was twice expelled from the party. In 2009, the BJP expelled him after his book 'Jinnah - India, Partition, Independence' was published.

He came back into the party fold 10 months later but faced a second expulsion in 2014 when he defied party orders and contested from Barmer as an Independent after being denied a ticket.

Though there were several highs and a few lows in his career in politics, his role and decision-making in the Kandahar hijacking have been the subject of much debate and dissection.

In a book, Singh, while talking about the IC 814 flight that was hijacked from Kathmandu to Kandahar in Afghanistan on Christmas eve in 1999 with 161 passengers and crew on board, said it was "most demanding and emotionally a most draining period" of his life.

Singh had accompanied the three released terrorists, including Jaish-e-Mohammed head Masood Azhar, on a flight to Kandahar for a hostage swap deal with the hijackers.

Singh had recounted in his book how the hijacking had taken place about an hour after he had become a proud grandfather to a baby girl, and that it was a tough decision to agree to swap the terrorists. He said he was opposed to any compromise to start with but slowly began to change as time passed.

Singh, who had close ties across the political spectrum, was known to be a scholarly gentleman in political circles but was never one to hold back his views.

Expressing his anguish over Singh's demise, Defence Minister Rajnath Singh said he served the nation in several capacities and distinguished himself as an effective minister and parliamentarian.

"Jaswant Singh ji would be remembered for his intellectual capabilities and stellar record in service to the nation. He also played a key role in strengthening the BJP in Rajasthan," he said.

Former Union minister Omar Abdullah tweeted, "Jaswant Singh sahib was my senior minister when I was Minister of State External Affairs. He was supportive without being interfering, was always available for advice & never made me feel like my work didn't matter."  "He was the perfect boss & mentor," he said.

He was also a prolific writer and authored several books in Hindi and English. He also contributed widely to Indian and foreign magazines, newspapers and journals on international affairs, security and development issues. PTI