Psychiatrists have a term for it ‘broken heart syndrome' 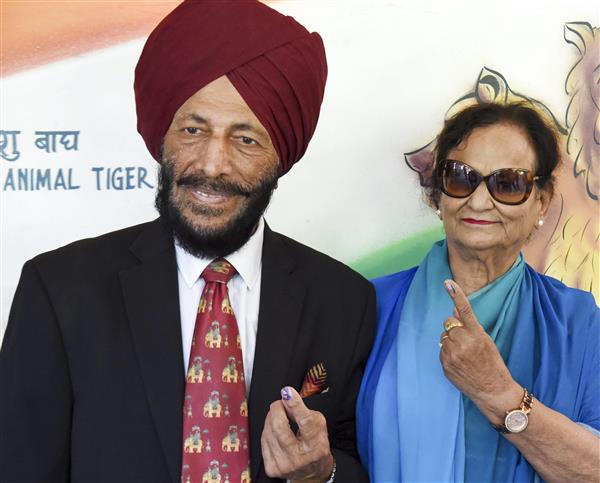 As the pandemic swept through India, many other couples faced the same tragedy—partners for decades or perhaps beginning their journey together giving up on life, within weeks and sometimes just days of each other.

Psychiatrists have a term for it – ‘broken heart syndrome'. And the legendary Singhs may have epitomised it.

While Singh, one of India's greatest sporting icons, died late Friday in a Chandigarh hospital after a long battle with Covid at the age of 91, his wife, national volleyball player Nirmal Kaur, passed away on June 13, 58 years after they got married and 65 years after they first met.

Their children, three daughters and a son, golfer Jeev Milkha Singh, doffed their hat to “true love and companionship”.

"He fought hard, but God has his ways, and it was perhaps true love and companionship that both our mother Nirmal ji and now Dad have passed away in a matter of five days," a statement from the family said.

And they are not the only ones.

Former Rajasthan chief minister Jagannath Pahadia and his wife, former MLA and Rajya Sabha MP Shanti Pahadia, lived together and died together – well almost. He took his last breath at the age of 89 on May 20 in a Gurgaon hospital. She, two years younger, was in the same hospital and passed away three days later.

“Both of them lived together for their entire lives and remained politically active and left together for their heavenly abode. They were married in their childhood by their parents and lived happily thereafter," their son Om Prakash Pahadia said.

Senior journalists Kalyan Baruah and Nilakhshi Bhattacharya also lost their battle to Covid in a Gurgaon hospital in May. Like the Pahadias, they, too, passed away within three days of each other.

After a lifetime of togetherness, Bikaner-based couple Om Prakash and Manju Devi couldn't, it seems, bear to be apart either. They passed away in November within 15 days of each other.

Married for nearly four decades, the couple stuck together through many ups and downs, including financial woes and the weddings of their five daughters.

Their nephew, who did not want to be named, said it was possible his aunt could not bear the news of her husband's death.

“While my uncle passed away in the hospital due to Covid complications, I think it was the grief of his death that likely resulted in my aunt suffering a brain haemorrhage that eventually led to her death,” he told PTI.

In such cases—where one partner has passed away while the other is still recovering—medical experts recommend that the news of the death be shared only after the spouse is well out of danger.

“Informing the spouse when one is physically devastated can destroy mental equilibrium, thereby causing deterioration.

“I have been part of teams that have been involved in informing the other spouse after recovery. The presence of family, a doctor and a counsellor is ideal. Allowing the process of grieving to begin effectively with support is the key,” Shetty told PTI.

Gurgaon-based psychiatrist Jyoti Kapoor added that the news of the demise of a partner often makes the other suffer from what is known as a ‘broken heart syndrome' - a temporary heart condition caused due to high stress and overwhelming emotions.

She said it was natural for couples who had lived together for decades to share a strong emotional dependence, where the loss of one can create significant stress for the other.

“Our personal experience, as well as research, has suggested that depending upon circumstances of the living partner and individual vulnerability to handle stress, the risk of death in male spouse after wife's death is 18 per cent, and risk of women's death following the death of the husband is around 16 per cent.

“This has sometimes been described as 'broken heart syndrome', a sort of physical ramification of extreme emotional stress among individuals with pre-existing physical vulnerabilities like chronic illness or frail health,” Kapoor said.

Losing a partner in the best of circumstances is challenging. People take years to come to terms with the death of a terminally ill spouse whose death is almost inevitable.

The pandemic has magnified this ordeal for couples—not only were the deaths sudden, but the partners also left behind were fighting for their own lives as well.

Arpita Basu Roy's parents passed away within four days of each other. Both were in hospital together. Not visibly romantic, they were “soulmates” married for 30 years, she said. One would never eat, unless sure that the other person has eaten too.

So when her mother passed away, it was almost like her father knew, and gave up on his desire to live.

“The last day I saw my father, (after my mom expired), he was all numb. He did not even respond to my sister. He was staring blankly, as if in a state of shock. We think he understood that she was gone, and was unable to accept the news.

“They were soulmates and probably could not live away from one another... so they decided to depart together,” the Kolkata-based Roy told PTI.

While there is no data to establish the number of couples who succumbed to Covid-19, the National Commission for Protection of Child Rights (NCPCR) gives an estimate – that 3,261 children were orphaned during the pandemic.

This data, released earlier this month, only takes into account children from 0-18 years. The actual numbers would be much more.

An official in Tamil Nadu estimated that at least 50 couples succumbed to Covid-19 days after either one contracted the infection during the first wave last year.

District Child Protection offices in the state have identified about 50 children who had lost both parents.

Describing his enormous sense of loss at losing both parents to the virus, comedian Bhuvan Bam said nothing would ever be the same again.

Meri aai mere pass nahi hai, baba mere saath nahi hain. Ab shuru se jeena seekhna padega. Mann nahi kar raha. (Nothing is same without my father and mother. Everything is shattered within one month. My home, my dreams, everything. Will have to learn living from scratch. I don't want to.)

“Was I a good son? Did I do enough to save them? I'll have to live with these questions forever. Can't wait to see them again. I wish the day comes soon,” the Mumbai-based artist wrote on Instagram last week.

In Karnataka's Mandya district, Nanjunde Gowda was anxiously awaiting the birth of his child, but died of Covid-19 on April 30. On May 11, his wife Mamata gave birth to their daughter. Three days later, she, too, was dead.

And Covid claimed another victim. — PTI