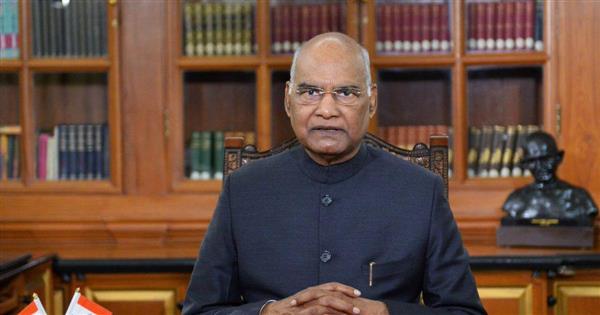 President Ram Nath Kovind on Friday said while India believes in peace it is also capable of giving a befitting response to any attempt of aggression as shown by its troops in Galwan Valley in eastern Ladakh after “some in our neighbourhood”, a veiled reference to China, tried to carry out their “misadventure of expansion”.

In his address to the nation on the eve of the 74th Independence Day, Kovind also spoke about the ‘Aatmanirbhar’ initiative launched by Prime Minister Narendra Modi, and allayed fears of foreign investors saying India’s self-reliance means being self-sufficient without alienating or creating distance from the world, with which it would continue to engage.

Touching upon the COVID-19 pandemic, Kovind said the nation is indebted to doctors, nurses and other health workers who have been continuously on the forefront of the fight against the disease which has disrupted all activities world over and taken a huge toll. India’s COVID-19 caseload surpassed 24 lakh on Friday after 64,553 more people tested positive and the recoveries rose to over 17 lakh, according to the Health Ministry.

He also complimented the Modi government, noting it is very reassuring to note that the Centre while anticipating the tremendous challenge responded effectively and well in time. “For a country so vast and diverse with high population density, meeting this challenge requires super-human efforts,” he said.

Without taking China’s name, the President said “while the world community needs to fight together against the greatest challenge (COVID-19) before humanity, some in our neighbourhood tried to carry out their misadventure of expansion”.

He saluted the brave soldiers who laid down their lives defending the country’s borders.

“Those worthy sons of ‘Bharat Mata’ lived and died for national pride. The entire nation salutes the martyrs of Galwan Valley. Every Indian feels grateful to their family members,” he said. Twenty personnel of the Indian army were killed during clashes with the Chinese PLA in Galwan Valley in eastern Ladakh on June 15.

“Their bravery in combat has demonstrated that while we believe in peace, we are also capable of giving a befitting response to any attempt of aggression. We are proud of the members of our Armed Forces, paramilitary forces and police personnel who protect the borders, and ensure our internal security.”

The President also said construction of the temple at Shri Ram Janmabhoomi in Ayodhya “was indeed a moment of pride for all”. Prime Minister Modi performed the ‘Bhoomi Pujan’ for the Ram temple on August 5.

“People of the country maintained restraint and patience for a long time and reposed unflinching trust in the judicial system. The issue of Ram Janmabhoomi was resolved through judicial process.” All concerned parties and the people respectfully accepted the verdict of the Supreme Court and displayed before the world, Indian ethos of peace, non-violence, love and harmony, he said.

Talking about the economy, the President said it has been the tradition of India that “we do not just live for ourselves, but work for the well-being of the entire world.

“India’s self-reliance means being self-sufficient without alienating or creating distance from the world. It implies that India will continue to engage with the world economy while maintaining its identity.” President Kovind said the overwhelming support India got at the elections for the non-permanent seat of the United Nations Security Council is a testimony to the goodwill we enjoy internationally.

The year 2020 had taught some tough lessons to the world as the “invisible virus has demolished the illusion that human being is the master of nature”, he said, adding he believed it is still not too late for humanity to correct its course and live in harmony with nature and ensure that 21st century is remembered as the century when humanity put aside differences and collaborated to save the planet.

The pandemic, like climate change, has awakened the global community to our shared destiny.

In my view, ‘human-centric collaboration’ is more important than ‘economy-centric inclusion’, in the present context, he said, adding “the greater this change, the better it will be for the humanity.

He said the second lesson was that “we are all equal before nature and we primarily depend on our fellow residents for survival and growth.

“Coronavirus does not recognise any artificial divisions created by human society. This reinforces the belief that we need to rise above all man-made differences, prejudices, and barriers. Compassion and mutual help have been adopted as basic values by the people in India. We need to further strengthen this virtue in our conduct. Only then can we create a better future for all of us.”

He also said it was time for augmenting health infrastructure as public hospitals and laboratories have been leading the fight against COVID-19.

“Public health services have helped the poor cope with the pandemic. In view of this, public health infrastructure needs to be expanded and strengthened,” he added.

The President, while speaking about the lessons learnt, mentioned that the pandemic has highlighted the need to accelerate developments in science and technology.

“During the lockdown and subsequent unlocking, information and communication technology has emerged as an effective tool for governance, education, business, office work and social connect. It has helped meet the twin objectives of saving lives and resumption of activities,” he said.

He highlighted that government offices as well as judiciary has been extensively using virtual interface to discharge their functions and technology has enabled certain establishments in government and private sectors to work overtime to keep the wheels of the economy running.

“Thus, we have learnt the lesson that adoption of science and technology, in harmony with nature, will help sustain our survival and growth,” he said.

Kovind also spoke about the New Education Policy unveiled recently, and said he was confident that with the implementation of this policy, a new quality education system will be developed and this will transform the future challenges into opportunities, paving the way for a New India.

He said when India won freedom, many predicted that our experiment with democracy will not last long “but we have always nurtured them as our strengths that make the largest democracy in the world so vibrant. India has to continue playing its leading role for the betterment of humanity”.

He complimented people for showing patience and wisdom being demonstrated in coping with the pandemic has been appreciated all over the world.

“I am confident that you will continue to maintain caution and act responsibly,” the President said.

India has a lot to offer to the global community, especially for intellectual and spiritual enrichment and promotion of world-peace, he said and added, “With this spirit, I offer a prayer for the well-being of one and all”. PTI