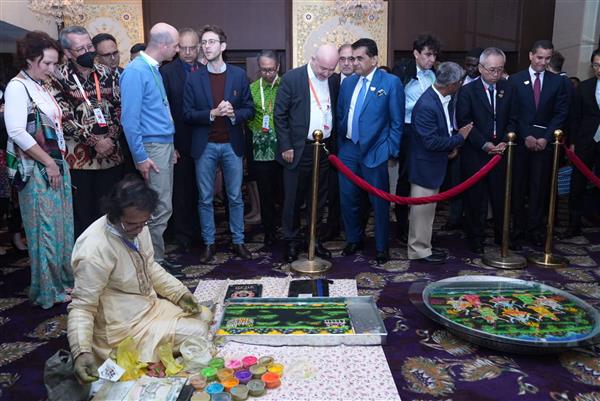 The first Sherpa meeting under India's G20 presidency began here on Sunday that would give New Delhi the opportunity to put the agenda of developing countries before the leaders' summit next September.

India's Sherpa Amitabh Kant set the tone for the meeting by flagging issues such as charting the path for inclusive, resilient and sustainable growth, accelerating the pace of creating better livelihood and improving healthcare and quality of life as the world recovers from the COVID-19 pandemic.

"We are passing through massive geopolitical crisis. We have seen the breakdown of global supply chains, countries suffering from rising debt and the huge crisis of climate action and climate finance," Kant said addressing a side-event on Sustainable Development Goals at the first G20 Sherpa Meeting here.

Earlier, in an informal chat with reporters Kant said the presidency of G20 has given an opportunity to India to place the issues of the developing countries on the agenda of the multilateral forum.

"Earlier, we used to get agenda items from the developed world. Now, we get to set the agenda for the G20 meeting. We will tell the world that we are the mother of democracy," Kant said.

The discussion during the four-day meeting will focus on economics and finance with the International Monetary Fund making a presentation on the global economic scenario, Kant sharing India's priorities before his G20 counterparts, Department of Economic Affairs Secretary Ajay Seth highlighting the priorities of the finance track.

Issues such as technological transformation, green development, spotlighting women-led development, accelerating implementation of SDGs, and facilitating inclusive and resilient growth have been flagged by India as part of its agenda for the G20 presidency.

The Sherpa meetings will work towards building consensus on key cross-cutting issues, which will be discussed in the various G20 work streams for inclusion in the Leaders' Declaration, which will be tabled at the G20 Summit in New Delhi next year, Kant said.

The Sherpas, personal emissaries of the G20 leaders, will oversee the negotiations to arrive at a consensus on key issues facing the world. There are 13 different working groups identified as Sherpa Tracks including the one on Disaster Risk Resilience and Reduction introduced by India for its presidency.

The working group on Disaster Risk Resilience and Reduction is important as G20 countries have a high level of exposure to disaster risk.

The working group is expected to encourage collective work by the G20, undertake multi-disciplinary research and exchange best practices on disaster risk reduction.

During the meeting, India will introduce broad priorities of all Working Groups and hear views from G20 countries, guests, and international organisations, an official statement said.

A 'Chai pe Charcha' will also be held to foster deeper conversations and strengthen ties among G20 member countries and their Sherpas.

The first Sherpa meeting under India's presidency plans to offer delegates a unique 'Indian experience' through cultural performances, art exhibitions, and excursions to various destinations including locations such as the Kumbhalgarh Fort, a UNESCO World Heritage site, and the Ranakpur Temple Complex.