Gold, silver believed to be from Kakatiya dynasty found in Telangana village 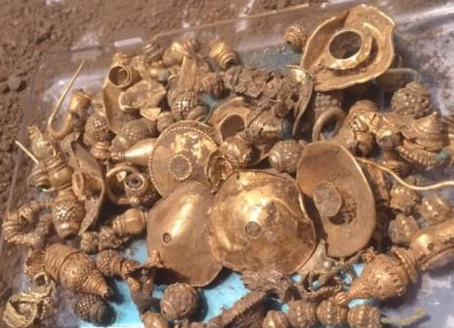 The valuables found after digging.

The valuables were found hidden in a copper pot and have since been taken away by the government.

Narasimha, who lives in Hyderabad and is into real estate business had gone to his village to turn his 11-acre land into a residential plot. Around 11 am, while digging was on they found a pot containing gold and silver valuables 2-ft deep into the plot. Narasimha informed the district administration who sent a team and collected the valuables.

District officials are ascertaining the value and time period when these could have been dug into the earth. An official said, “We recovered the valuables and sent it to the Collectorate. Further, instructions have been issued to the property owner against any digging activity in the premises until further orders.”

The copper utensil containing the gold and silver ornaments weighs 1,200 gm. Besides the ornaments a 6.5 gm ruby stone also was found.

It is believed that the valuables could be from the Kakatiya dynasty period. Carbon dating would reveal the exact time period of the find. District administration is contemplating the idea of carrying out some more excavations to unearth any hidden treasures there.