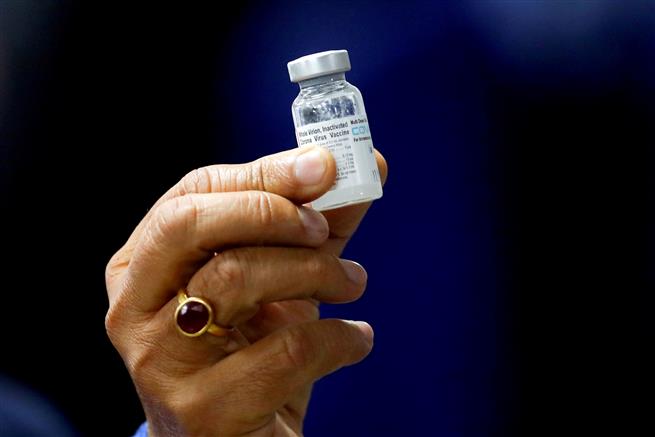 Covaxin has been indigenously developed by Bharat Biotech in collaboration with the Indian Council of Medical Research (ICMR). Reuters file

The government on Wednesday said it has permitted round-the-clock COVID-19 vaccination as part of efforts to speed-up the immunisation drive which received a fresh boost with the makers of the indigenous Covaxin saying it has shown an interim efficacy of 81 per cent in Phase 3 clinical trials.

Easing restrictions, all private hospitals were on Tuesday allowed to give the vaccines if they adhere to the laid down norms, while the 9 am to 5 pm timing was also done away with. More than 1.56 crore (1,56,20,749) vaccine doses have been administered in the country through 3,12,188 sessions since January 16, according to a provisional report till Wednesday 7 am.

“The government has lifted the time restriction to increase the speed of vaccination. People can now get vaccinated 24x7 according to their convenience. Prime Minister Narendra Modi understands the value of health as well as the time of citizens,” Health Minister Harsh Vardhan tweeted in Hindi, a day after he got his first dose of the COVID-19 vaccine.

President Ram Nath Kovind was administered the first dose of COVID-19 vaccine at an army hospital in the national capital on Wednesday.

The Indian Council of Medical Research, the country’s apex research body, and Bharat Biotech announced that phase 3 results of Covaxin, developed by them, has shown an interim vaccine efficacy of 81 per cent in preventing COVID-19, and dubbed it as an important milestone in vaccine discovery.

“The bench-to-bedside journey of completely indigenous COVID-19 vaccine in less than eight months’ time showcases the immense strength of Atmanirbhar Bharat [self-reliant India] to fight the odds and stand tall in the global public health community.

“It is also a testament to India’s emergence as a global vaccine superpower,” said Dr Balram Bhargava, Director General, ICMR, said on Wednesday.

In January, India’s drugs regulator had approved Oxford COVID-19 vaccine Covishield, manufactured by the Serum Institute, and Covaxin for restricted emergency use in the country, paving the way for the massive inoculation drive.

Maharashtra man dies after getting second dose of Covid vaccine

Some questions were raised on the approval to Covaxin as its phase three trial results were awaited, but the company and government authorities had discounted concerns.

“Today is an important milestone in vaccine discovery, for science and our fight against coronavirus. With today’s results from our phase 3 clinical trials, we have now reported data on our COVID-19 vaccine from Phase 1, 2, and 3 trials involving around 27,000 participants,” Bharat Biotech Chairman & Managing Director Krishna Ella said.

On Monday, Prime Minister Narendra Modi was administered Covaxin on the very first day of expansion of the inoculation drive to cover people aged 60 and above and those between 45-59 having co-morbidities.

Covaxin has been developed on the WHO prequalified vero cell platform which is globally recognised with a well-established track record of safety, the ICMR said.

It said Covaxin’s ability to neutralise the UK variant strain of SARS-CoV-2 has also recently been established.

“The development and deployment of Covaxin ensures that India has a powerful weapon in its arsenal in a continually evolving pandemic situation and will go a long way in helping us win the war against COVID-19.

“The need of the hour is to ensure that people in India continue to receive the vaccine and break the chain of virus transmission,” said Dr Samiran Panda, Head, Epidemiology and Communicable Disease, ICMR and Director, National AIDS Research Institute.

Union Health Secretary Rajesh Bhushan had told a press conference on Tuesday that the timeline of vaccinating the beneficiaries from 9 am to 5 pm has been done away with and it is up to the hospitals to decide whether they want to continue administering the vaccines even after that.

The second dose of the vaccine against COVID-19 was being administered from February 13 for those who have completed 28 days since the receipt of the first dose. The vaccination of frontline workers (FLWs) started on February 2.

The second phase of the COVID-19 vaccination commenced from March 1 for people over 60 years of age and those aged 45 and above with specified co-morbid conditions. —PTI