Protest limited to farmers of one state: Narendra Singh Tomar 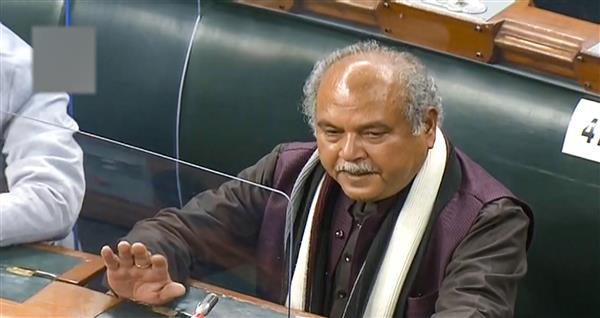 Putting up a strong defence of the new farm laws, Agriculture Minister Narendra Singh Tomar on Friday said the government’s offer to amend them to assuage farmers’ sentiments did not mean they had any flaws and that none from the protesting unions or their sympathisers have been able to point out any lacuna.

Also read: Opposition amps up their stand against farm laws in Rajya Sabha

Countering the opposition claim that farmers across the country are agitated over the three new laws, he said that those in just one state are being misinformed and instigated.

His comments in Rajya Sabha referred to protests at the border points of the national capital being led by farmers from Punjab.

The government, he said, is committed to welfare of farmers and to the continuation of the mandi system of procurement of crops on minimum support price (MSP) based mechanism.

The laws give farmers alternatives to sell their produce outside ‘mandis’, and unlike the state government notified market places, such sale would not attract any tax.

“The agitation should have been against the tax levied (by state government) on sale made in mandis but strangely the protests are against freeing of the system from such taxes,” he said, intervening during the discussion on a motion thanking the President for his address to the joint sitting of Lok Sabha and Rajya Sabha at the start of the Budget Session.

Tomar said farmer unions and the opposition have not been able to point out any lacuna in the three laws.

“Government’s offer to make amendments in the laws does not mean there are any shortcomings in them,” the minister added. —with PTI

SC Mishra of BSP, Praful Patel of NCP, Sanjay Raut of Shiv Sena and B Viswam of CPI tore into the government’s policies and demanded the repeal of the laws.

Also read: Upset with Tendulkar, scores of Malayalee netizens regret 2015 criticism of Sharapova for not knowing him

86% per cent of farmers are small, marginal; don't get access to the market and benefit of MSP: Agriculture Minister Narendra Singh Tomar

Tomar said the government was working towards increasing agriculture production and productivity.

"We are already self-sufficient in Agri production," said Tomar.

The aim is how to increase farmers' income, he added.

"Of 14 crore farmers only 10,75000 are registered under PM Kisan yojna. There will be no shortage of fund in the scheme," he said.

Tomar said 86 per cent of farmers in India are small and marginal. They do not get access to the market or the benefit of MSP, he added.

Attempts are being made to improve Agri infrastructure across the country, he said.

"100 kisan rail have been started. Kisan udan is also helping farmers," he said.

Tomar said farm laws were an issue of importance.

"Opposition termed it a black law. I asked even farmers what is black in it. But no-one told me anything," he added.

We spoke to farmers 12 times and asked them what was wrong with the laws.

"Government is ready for any amendment in the law but this doesn't mean that there is something wrong in the law," he said.

SS Dhindsa of SAD demaded the withdrawal of the farm laws and asked for PM Modi's intervention to solve the impasse on the laws.

Partap Singh Bajwa of the Congress criticized the government's farm laws and demanded their withdrawal.

He urged the government not to defame the protesting farmers and condemned the Republic Day violence in the national capital. Bajwa demanded a probe by a sitting Supreme Court Judge should be completed within two months.

Chairman of the House Venkaiah Naidu said that while raising farmers' issue, references to castes and religions must be avoided.

Anand Sharma of Congress flayed the government and said the Address omitted the mention of the plight of migrant workers during lockdown is unfortunate.

Sharma said farm laws were pushed when the entire country and the world was sucked in the vortex of the coronavirus pandemic.