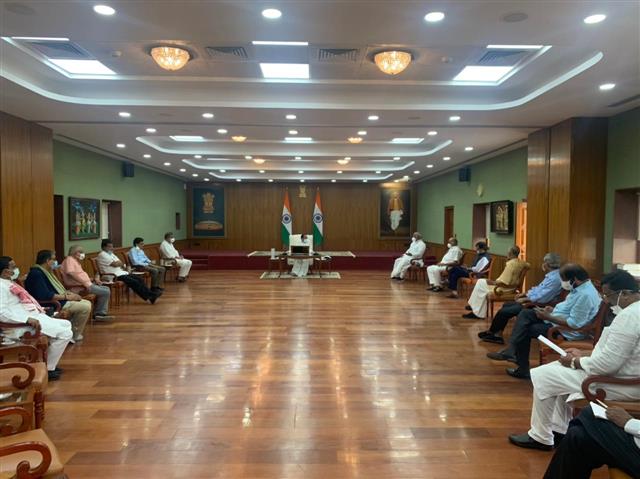 Bitterness witnessed throughout the Monsoon Session of Parliament on Thursday was seen again with the government and the opposition at daggers drawn over the issue of washout of the Parliament proceedings.

While leaders of 11 Opposition parties minus TMC submitted a memorandum to Rajya Sabha Chairman M Venkaiah Naidu accusing the government of stonewalling them in Parliament, Union ministers Piyush Goyal, Pralhad Joshi and MA Naqvi separately met Naidu demanding action against the opposition MPs for “gross misconduct in the Rajya Sabha”.

The government is gearing up for a major political offensive against the opposition, which in a letter to Naidu said, “The government stonewalled the Opposition demand for discussion in the monsoon session. It has become abundantly clear that the present government does not believe in parliamentary accountability and was running away from debate on Pegasus which resulted in a deadlock.”

The Opposition said it had been repeatedly requesting the government to sincerely engage with the Opposition parties to break the impasse, but the government remained arrogant, insincere and obdurate. It is the government which is squarely responsible for the stalemate as it has refused to accept the opposition’s demand for an informed debate in both the Houses, it added.

“The government used its brute majority to push through its legislative agenda in violation of established procedures, conventions and spirit of parliamentary democracy. To divert attention from its own conduct and actions, the government has unleashed a state-sponsored, malicious and misleading campaign by blaming the combined Opposition for the disruption of Parliament. What happened in Rajya Sabha on Wednesday was shocking, unprecedented, sad and an insult to the very dignity of the House and humiliation of the members of the august House. Without any provocation from the Opposition, outsiders who were not part of Prliament security were brought in to manhandle the Opposition leaders and members, including women parliamentarians who were only protesting against the government’s conduct, highhandedness and muzzling of the voice,” alleged the opposition leaders.

They condemned the “authoritarian attitude and undemocratic actions” of the government saying, “We remain committed to continuing our struggle against the assault on parliamentary democracy and agitate on the issues of national importance and people’s concern.”

The opposition said the Monsoon Session of Parliament was deliberately derailed by the government. The opposition accused the government of not allowing discussions on issues, including Pegasus, farmers’ agitation, inflation, and deteriorating economic situation.