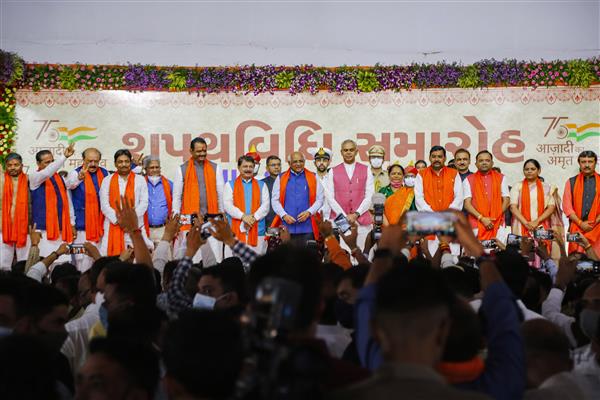 Gujarat Chief Minister Bhupendra Patel along with his state ministerial cabinet during the swearing-in ceremony in Gandhinagar, on Thursday, September 16, 2021. PTI

Marking an unprecedented move, the ruling BJP on Thursday completely overhauled the Gujarat council of ministers, selecting all new faces for the Bhupendra Patel government.

Significantly, none of 24 ministers sworn-in today had served in the erstwhile Vijay Rupani government.

The central leadership adopted a “no repeat” formula to beat the anti-incumbency and other issues facing the party in the crucial 2022 elections in the home state of Prime Minister Narendra Modi and Home Minister Amit Shah, perhaps also serving a message to leaders in other party-ruled States

The new ministers include 10 in the Cabinet’ rank and 14 Ministers of State. Together with CM Bhupendra Patel, there are now 22 (21 ministers) first timers in the council. Prominent among those dropped is Patidar heavyweight and former deputy CM Nitin Patel and Bhupendrasinh Chudasama, the education minister in the Rupani government.

Those inducted include former state BJP chief Jitubhai Vaghani and Assembly Speaker Rajendra Trivedi. Though majority are first-time legislators with only some with previous ministerial experience like Rajendra Trivedi, a minister in the Anandiben government and Kiritsinh Rana, who served under Narendra Modi.

Politically significant Saurashtra and south Gujarat regions have landed maximum berths in the Cabinet formulated keeping in mind caste and regional balance. Present state chief CR Patil comes from south Gujarat and observers say his clout is evident in the choice of ministers.

The transition was not as easy. Sources say marathon meetings were held to finalise the names. The ceremony, which was earlier scheduled on Wednesday, had to be postponed after upset sitting ministers, who were to be dropped, objected to the move.

Apart from anti-incumbency, the ruling BJP is facing several other challenges (including from AAP), battling negative perceptions and allegations of Covid-mismanagement in the state. Observers say through the overhaul of the state leadership by the central leadership appears a new formula to overcome the challenges

In any case, the leadership is clear that those who create “trouble by poking or continuously raising issues which eventually lead to the ouster of any CM should not be encouraged by giving them posts they have been vying for”, a signal perhaps for other states amid the buzz of “some more similar changes” in coming days.

Observers say that what has happened in the BJP in the past six months is somewhat of a rarity in the party under PM Modi and Home Minister Amit Shah. The leadership which almost never replaced any CM, including Jharkhand, where sentiments were clearly against incumbent CM Raghubar Das in 2019, changed as many as four in the past six months. What is even more surprising is the choice of replacements, mostly “second-rung leaders/back benchers in the state Assemblies” as some may in case of Bhupendra Patel and some of his ministers.

A second-rung leader makes control easier for those sitting in Delhi instead of some well-entrenched politician with his or her own baggage, followers and adversaries, explain observers. Moreover, they fulfil basic requirements of the party in the run up to the elections, which in any case will be formulated and led by PM Modi and Shah.

“Congratulations to all Party colleagues who have taken oath as Ministers in the Gujarat Government. These are outstanding Karyakartas who have devoted their lives to public service and spreading our Party’s development agenda. Best wishes for a fruitful tenure ahead,” Prime Minister Narendra Modi said.

Here are brief profiles of some of the ministers.

Rajendra Trivedi: He was nominated Speaker of the Gujarat Legislative Assembly in 2018 after serving as the Minister of State for Sports, Youth and Cultural Activities and Pilgrimage in the Rupani government.

The 67-year lawyer won from the Raopura seat in Vadodara district for the second time in 2017. He has been associated with the BJP since its Jan Sangh days and, as a lawyer, handled cases related to the 2002 post-Godhra riots.

Jitu Vaghani: He was the Gujarat BJP president till last year when he was succeeded by CR Paatil. The 52-year- old politician's first foray into electoral politics in 2007 was unsuccessful after he was defeated by senior Congress leader Shaktisinh Gohil in Bhavnagar (West).

In his second attempt, Vaghani was successful in the 2012 Assembly elections, and went on to retain the seat in 2017. This is his first foray into state cabinet.

Rushikesh Patel: The MLA from Visnagar in Mehsana district, he won from the seat for the second time in 2012.  Patel (61) is the chairman of APMC at Mehsana and has also served as the BJP's Mehsana district president.

He had accused Patidar quota agitation leader Hardik Patel, who is now Gujarat Congress working president, of ransacking his office in 2015 during a protest rally.

Purnesh Modi: He was elected from the Surat (West) Assembly constituency in the 2013 by-election after sitting MLA Kishor Vankawala died and retained the seat in the 2017 polls. This is for the first time that the BJP legislator will serve as a cabinet minister.

Purnesh Modi had filed a criminal defamation case against Congress leader Rahul Gandhi over his comment regarding "Modi" surname during the 2019 Lok Sabha election campaign.

Raghavji Patel: A former Congressman who won the 2019 by-election from the Jamnagar Rural Assembly constituency.  Raghavji Patel had switched side and joined the BJP after voting against Congress Rajya Sabha candidate, late Ahmed Patel, in 2018.

However, the Election Commission had invalidated his vote, which helped Ahmed Patel win and enter the Rajya Sabha.  His victory as a BJP candidate in the 2019 by-election was his third as an MLA from the seat, which he had won twice in the past as a Congress candidate.

Kiritsinh Rana: The MLA from the Limbdi Assembly constituency has in the past served as the minister of animal husbandry and forest and environment in two BJP governments. The 57-year-old was first elected as an MLA in 1995, and again in 2007, 2013 and 2020, the last two terms in by-elections.  The 2020 by-election in Limbdi was necessitated after the sitting Congress MLA Soma Patel resigned.

Pradip Parmar: He is the MLA from Scheduled Cast-reserved Asarwa Assembly constituency of Ahmedabad.  A first-time MLA, Parmar rose from a booth-level worker to an MLA and he is now a cabinet minister. The 57-year-old's dedication to the party since the last more than three decades has paid off.

Arjunsinh Chauhan: He is the BJP MLA from the Mahemdavad constituency. At 47, this first-time MLA from the constituency in Kheda district neighbouring Ahmedabad is one of the young faces of the Bhupendra Patel government.

Kanu Desai: The 70-year-old is the MLA from Pardi in Valsad district.  He is a two-term MLA from the seat.

Brief profiles of some ministers of state

Harsh Sanghavi: All of 36 years of age, Sanghavi is a two-term MLA from Majura in Surat city.  Sanghavi has won both the elections held in Majora after it was carved out as a separate assembly segment. Sanghavi is a diamond jeweller and was the youngest general secretary of the Gujarat BJP when he held the post.

Brijesh Merja: The BJP MLA from the Morbi Assembly constituency who was earlier in the Congress. Merja is among the MLAs who left the Congress to join the BJP. He won the 2017 Assembly elections on a Congress ticket, then switched side to the ruling BJP and went on to win the 2020 by-election from the same seat (Morbi). Merja had resigned ahead of the Rajya Sabha election in 2020, leaving the Congress in a position where it could not win more than one seat.

Jitu Chaudhary: A leader from the tribal community in Valsad district, he also belongs to the crop of BJP MLAs who were earlier in the Congress and subsequently won Assembly by-elections as ruling party candidates.  Chaudhary has won three-times from the Kaprada Assembly seat. He resigned from the Congress in 2020 ahead of the Rajya Sabha election.

Manisha Vakil: She is the MLA from Scheduled Caste-reserved Vadodara City Assembly constituency. She has won twice from the seat that was carved out after the 2008 delimitation exercise. She is one of the prominent women faces in the present government and a first-time minister.

Jagdish Panchal: He is the MLA from the Nikol Assembly constituency in Ahmedabad, a seat from where he has won twice.  The 70-year-old is a businessman and till recently served as the Ahmedabad city BJP president.  — With PTI