Half of my heart belongs in India, says former UN secretary general Ban Ki-moon in his book

In ‘Resolved: Uniting Nations in a Divided World’, published by HarperCollins India, Ban goes on to describe how he became a ‘man of peace’ from a ‘child of war’ 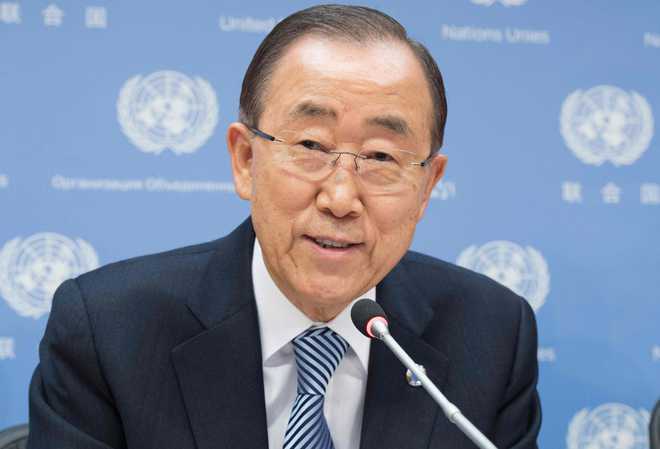 Former UN secretary general Ban Ki-moon’s first diplomatic posting was in India and he developed such a special connection that even 50 years later, he tells the Indian people that half of his "heart belongs in their country".

Ban also mentions in his autobiography that his three years in India was "such an exciting time in my life".

In ‘Resolved: Uniting Nations in a Divided World’, published by HarperCollins India, Ban goes on to describe how he became a "man of peace" from a "child of war".

Born in 1944, just one year before the United Nations itself, Ban's earliest memories are haunted by the sound of bombs dropping on his Korean village and the sight of fires consuming what remained.

As a six-year-old boy, he fled with his family, trudging for miles in mud-soaked shoes, suffering from incessant hunger, and wondering how they would survive - until the United Nations rescued them. Young Ban grew up determined to repay this lifesaving generosity.

On his days in India, he writes: "India was my first diplomatic posting, and Soon-taek (wife) and I arrived in Delhi in October 1972. I served there for almost three years, first as vice consul of the Korean Consulate General, and once a full diplomatic relationship was established between Korea and India in December 1973, I served as second secretary of the Korean Embassy."

His daughter Seon-yong was then just eight months old and his only son, Woo-hyun, was born in India on October 30, 1974.

"I used to joke with Indian people that my balance sheet with India is perfect because my son was born in India and my youngest daughter, Hyun-hee, is married to an Indian man. Even now, nearly fifty years later, I tell the Indian people that half of my heart belongs in their country," he writes.

He says his work in India was challenging but fascinating to a young diplomat.

"Our primary goal was to win full diplomatic recognition by India, a leader of the nonaligned group, which we did in December 1973. Koreans and many other diplomats felt that elevating consular relations to the ambassadorial level was a turning point in diplomatic relations. India was among the largest non-aligned states that recognised both Koreas," he says.

Ban performed what has been called the "most impossible job on this earth" with a genuine belief in collective action and global transformation. Meeting challenges and resistance with a belief in the UN's mission of peace, development and human rights, Ban steered the United Nations through a volatile period that included the Arab Spring, nuclear pursuits in Iran and North Korea, the Ebola epidemic, and brutal new conflicts in Central Africa.

In the book, Ban also talks about his election to the top UN post in 2006, in which India's Shashi Tharoor was also a contender.

"Thailand's candidate, Surakiart Sathirathi, was the only one that felt like a real rival to me at that time. Tharoor and (Sri Lankan diplomat Jayantha) Dhanapala did not have the strong support of their governments," he claims.

In the first two straw polls, an informal voting held at the 15-member UN Security Council to gauge support enjoyed by the candidates, Ban emerged victorious with Tharoor coming second.

"The results (of the first straw polls) exceeded my expectations. I was the latecomer, but I was now the frontrunner. The path to the UN secretary-general's thirty-eighth floor office began to glimmer into focus. But I could not get rid of the worry that the negative vote had come from a permanent member of the Security Council. It was rumoured that Shashi Tharoor did not enjoy the Indian government's support, but the fact that he received 10 votes made me anxious," Ban recalls.

But he says the results of the third straw poll, conducted on September 28, were a disappointing surprise.

"I received only 13 'encourage' votes and one each for 'discourage' and 'no opinion expressed'. I could not understand what had happened. However, I was the only candidate who received more than the nine-vote minimum to win. The other candidates had lost votes: Shashi Tharoor had eight votes, losing two positive votes, and Surakiart, stung by his support of Thailand's recent military coup, received only five votes," he writes.

Finally, he was elected to "what was widely known as the most impossible job on earth" and then re-elected to a second five-year term in June 2011.

In the book, Ban also hails India for "raising the bar" and providing the United Nations’ first all-female Formed Police Unit (FPU) for service in 2007 in Liberia, which was then beginning to recover from a violent two-decade power struggle.

The sight of 125 women drilling in formation in peacekeeper blue was an electrifying role model in a country where women had paid heavily during back-to-back civil wars. During night patrols, the unit has deterred sexual violence and helped rebuild safety and confidence among the population," he writes. PTI