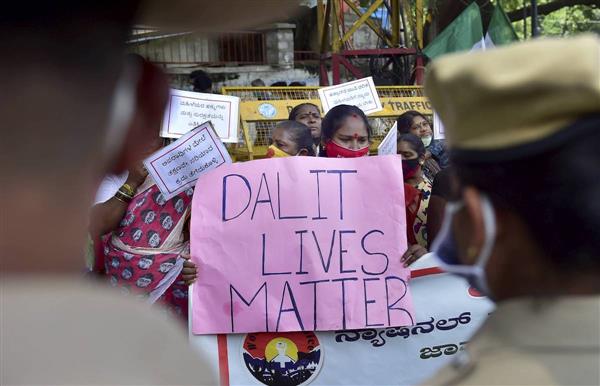 Amid tight security, the victim's father, mother and three brothers left Hathras at about 6 am and will reach Lucknow by noon. PTI photo.

Family members of the 19-year-old Dalit woman who died after allegedly being raped by four upper caste men in Uttar Pradesh’s Hathras appeared before the Lucknow Bench of the Allahabad High Court, which fixed November 2 as the next date of hearing.

They were heard by the Bench of Justices Pankaj Mithal and Rajan Roy on Monday.

The UP Additional Chief Secretary; DGP; and the ADG (Law and Order) also deposed before the court, along with the Hathras DM and SP.

The DM told the court that the decision to cremate the body in the night was taken due to the law and order considerations and there was no pressure from the state authorities.

Additional Advocate General VK Shahi, who represented the state authorities in the court, said the next date of hearing has been fixed for November 2.

The woman’s father, mother and three brothers were brought to the court amid tight security from Hathras earlier in the day.

The court had summoned the Additional Chief Secretary, Home; the Director General of Police; ADG, Law and Order; and the District Magistrate and Superintendent of Police of Hathras to furnish the status report of investigation into the case.

The woman was allegedly raped by four upper caste men on September 14.

She succumbed to severe assault injuries at a Delhi hospital a fortnight later, which was followed by a hushed up cremation at night, allegedly forced by the district administration.

The brutal injuries suffered by the woman and the administration’s move to cremate her body late at night triggered a massive outrage, resulting in a pitched political battle from Delhi to Hathras.

“Shocked” by the murder and alleged gang rape of the Dalit woman and the subsequent cremation, the Lucknow Bench of the Allahabad High Court had on October 1 summoned top government officials. PTI