Maharashtra’s death toll now stands at 51,753, with the case fatality rate at 2.47 per cent 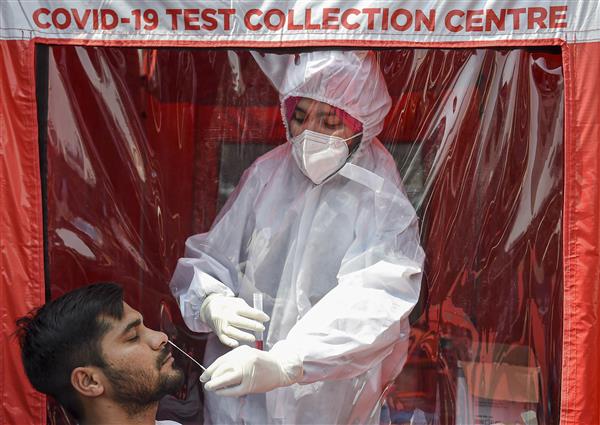 A medic collects swab samples from a person in Mumbai. PTI photo.

As Maharashtra grapples with a spike in coronavirus cases, health experts and government officials are putting the onus for the surge on people not following face mask and social distancing norms.

There is also talk of a fresh lockdown, days after the reopening of public transport, educational institutions and religious places, as fresh cases from rural areas of the state and non-slum areas in Mumbai continue to increase.

The surge in COVID-19 cases continued in Maharashtra for the fifth consecutive day on Saturday, with 6281 new cases, the highest daily addition in 85 days, taking the state’s caseload to 2093913.

Maharashtra’s death toll now stands at 51,753, with the case fatality rate at 2.47 per cent, well above the national figure of 1.42 per cent.

“People are not following Covid-appropriate behaviour. They need to restrain themselves,” he said.

“There is laxity in following protocols. People are not adhering to Covid-appropriate behaviour,” he said.

“Authorities have to tell people that coronavirus is still around and the masses should not be lax and negligent,” Vyas said.

In Mumbai, as the number of positive cases rose to 3.17 lakh, with the recent daily increase, BMC officials said the surge is being led by non-slum areas.

“Almost 90 per cent of the new cases are coming from buildings. Most of them are either asymptomatic or mild and prefer to stay at home, said additional municipal commissioner Suresh Kakani.

The spike is due to increased testing and an intense surveillance process, he said.

Between Monday and Friday, the state added 23,354 cases, much higher than the 15,149 cases that were added in the same duration the previous week.

The doubling rate has dropped from 600-plus days to 393 days, another civic official said, attributing the rise to the reopening of various services.

“More international travellers are landing in Mumbai; domestic travellers from Kerala are being tested apart from those from Delhi, Rajasthan, Gujarat and Goa. More services have opened up since February 1, leading to a rise in cases,” he said.

Amravati, Yavatmal and Akola districts of Vidarbha are seeing a sudden spurt, reporting over 1,400 new cases per day.

Kakani said the Brihanmumbai Municipal Corporation (BMC) had no plans for a lockdown in Mumbai for now and would instead focus on increased testing and treatment, and strict implementation of face masks in public places.

Mumbai recorded 897 new cases on Saturday. The BMC has sealed 1,305 buildings or floors across Mumbai to contain 71,838 households. At least 2,749 cases have been found across these houses and can affect 2.75 lakh population in the vicinity, an official said.

BMC has instructed all jumbo Covid centres in the city to inspect ventilators, para-monitors, housekeeping, medicines, supplies, oxygen, fire equipment and security so that when patients increase they are ready to admit them at once, the official said.

There are 11,968 isolation beds in Mumbai, and of them, around 9,000 are vacant across government and private hospitals.

Dr Subhash Salunkhe, who chairs the Communicable Communicable Diseases Prevention and Control Technical Committee, said he noticed a sudden surge in Amravati and Akola in the last few days, adding inter-district travel could lead to a spike all over the state.

The BMC on Friday penalised 13,592 people for not wearing masks in public places and collected Rs 27.18 lakh as a fine.

Officials have been directed to increase scrutiny and ensure people comply with the face mask rule.

In trains and local stations, a special squad of 300 officials has been formed to check for compliance by commuters.

The BMC has so far penalised 15.71 lakh people in Mumbai and collected Rs 31.7 crore as a fine.—PTI