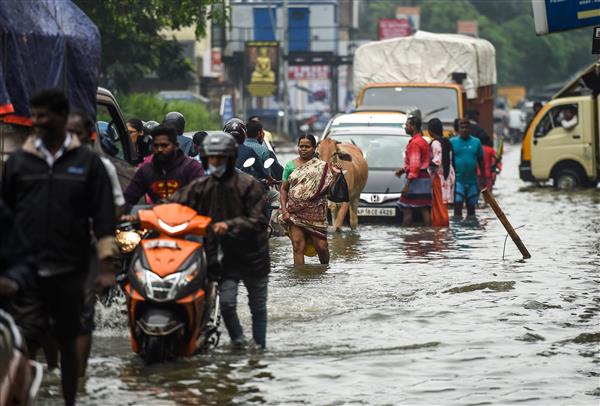 A scene after the heavy rain in Chennai. PTI

The depression over Bay of Bengal will cross the coast between north Tamil Nadu and south Andhra Pradesh on Thursday evening and the city would witness "strong" winds up to 45 km, the weather office here said on Thursday.

Most districts in northern Tamil Nadu including Chennai are likely to receive heavy to very heavy rain, Deputy Director General of Meteorology S Balachandran said, even as the city and its suburbs received sharp showers all through the night and on Thursday morning as well.

"It is very likely to continue to move west-northwestwards and cross north Tamil Nadu and adjoining south Andhra Pradesh coasts around Chennai by Thursday evening," it added.

"People should not venture out unnecessarily," he told reporters.

The system was being constantly monitored, he said in response to a question.

Rains continued to lash various parts of the city and its suburbs on Thursday, leading to inundation in many areas like KK Nagar even as a number of subways and roads in many parts of the metro were closed for vehicular traffic.

Police said trees were uprooted in places like Egmore and Perambur.

Personnel of Greater Chennai Corporation, police and fire and rescue services were involved in various relief and rescue work, including pumping out stagnant water.

The north-east monsoon, which brings the bulk of rainfall to Tamil Nadu, has been active for the past fortnight and many parts have been receiving incessant rain since Sunday. PTI