Launching scathing attack on PM, Rahul Gandhi said he is ‘not afraid of Narendra Modi’ and will not be ‘intimidated’ by the ED action 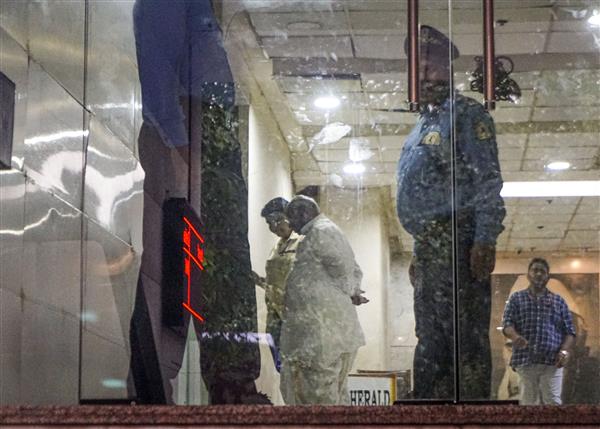 The ED on Thursday resumed its searches at the office of Young Indian (YI) here in the National Herald case after Mallikarjun Kharge presented himself before the probe agency with the Congress slamming the summons to the senior party leader right in the middle of the Parliament session.

The appearance of 80-year-old Kharge before the officials of Enforcement Directorate(ED) at the Herald House building and its action in the money laundering case linked to the Congress-owned newspaper also turned into a slugfest between the Congress and the BJP after the Leader of Opposition in the Rajya Sabha told the House during Question Hour he was summoned to appear at 12.30 PM.

The Congress also raised the issue of ED action in both the Houses of Parliament and caused disruptions.

While Kharge, who was quizzed for over seven hours, alleged this was an attempt to “frighten and intimidate” the Congress and wondered if democracy would remain alive, his party said the ED summons during the working hours of Parliament was a “black chapter of democracy” and an “insult” to the legislature.

Union minister Piyush Goyal, who is the Leader of the House in the Rajya Sabha, hit back and rejected Kharge’s charge as “baseless”. He maintained that the government does not interfere in the functioning of law enforcement agencies, and asked the Congress leaders to face the law instead of running away.

Launching a scathing attack on the prime minister, senior Congress leader Rahul Gandhi said he is “not afraid of Narendra Modi” and will not be “intimidated” by the ED action in the National Herald case.

Rahul’s attack drew a sharp response from the BJP which accused the Congress of trying to spread “anarchy” and “abusing and intimidating” the ED.

“Sonia Gandhi and Rahul should know that they are not above law. The country is governed by the Constitution,” BJP spokesperson Gaurav Bhatia said.

Targeting the government, the Congress said Kharge’s summoning by the ED during the working hours of Parliament was an “insult” to the legislature and alleged that “Modishahi” is reaching a new low.

Congress general secretary Jairam Ramesh said Kharge was called by the probe agency when Parliament is in session and he left around 12:20 pm and presented himself.

Senior Congress leader Digvijaya Singh told reporters that summoning of the Leader of Opposition in Rajya Sabha by a probe agency during Parliamentary proceedings had never happened in the history of democracy.

“There is no such example in the history of democracy,” Singh said.

Kharge reached the Herald House building in the heart of the capital around 12:40 pm and met ED officials on the summons of the agency which sought his attendance during the searches at YI in his capacity of being the principal officer of the company.

The federal agency had put a temporary seal at the single-room office of the YI, located on the ground floor of the four-storeyed Herald House building, to “preserve evidence” as it could not search it during the last two days because it was locked and authorised representatives were not available.

The searches at YI office which were on hold will be carried out now and any possible evidence available will be collected, officials said.

Rahul Gandhi’s attack on the government came a day after the ED sealed the YI office and the Delhi police briefly barricaded the AICC office, the residence of Sonia Gandhi and his home.

“These are attempts at intimidation,” he told reporters outside Parliament. “We will not be intimidated. We are not afraid of Narendra Modi.” In his first response after the ED sealed the premises of Young Indian, Gandhi said, “They may do whatever they want. It does not matter. I will continue to work to protect the country and democracy and maintain harmony in the country. I will continue to do my work whatever they may do.” Later, in a tweet in Hindi he escalated his criticism of the government and the prime minister.

“Truth cannot be barricaded. Do whatever you want, I am not afraid of the Prime Minister, I will always work in the interest of the country. Listen and understand!” Many Congress leaders also gave adjournment notices in both the Lok Sabha and Rajya Sabha, but these were not allowed by the Chair.

Kharge also raised the issue in the Upper House, alleging the government was “misusing” agencies to target Opposition leaders and demanded answers from the government on the ED action.

Congress leaders also sought to raise the issue in the Lok Sabha in the morning but were not allowed and the House was adjourned till 2 PM.

The office of the National Herald newspaper and web portal, where the editorial staff and administrative staff works, is located on the fourth floor of the Herald House building.

The newspaper is published by Associated Journals Ltd. (AJL) and its holding company is Young Indian. The newspaper office is registered in the name of AJL.

The ED had on Tuesday launched raids at a dozen locations, including at the Herald House, as part of its ongoing money laundering probe in the National Herald-AJL-Young Indian deal.

Agency officials had left the premises in the early hours of Wednesday after they collected some documents, digital data and questioned some staffers.

The ED had questioned Sonia Gandhi in July and Rahul Gandhi in June in connection with the money laundering case at its headquarters in Delhi besides quizzing Kharge and Pawan Bansal in April.