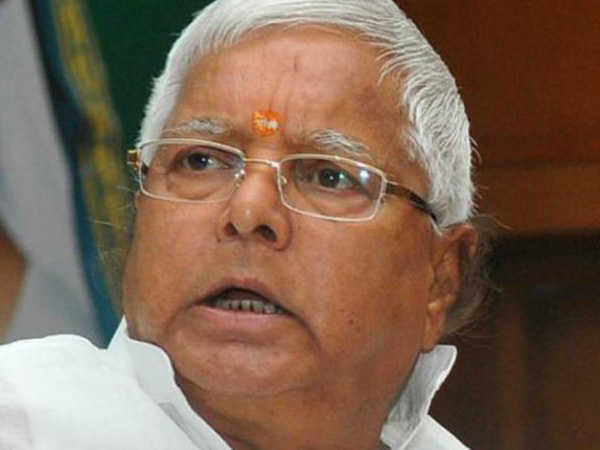 The Jharkhand High Court on Saturday granted bail to RJD president Lalu Prasad in the Dumka treasury case of the multi-crore rupees fodder scam on completion of half the sentence period, paving way for his release from jail.

The bail order was given by Justice Aparesh Kumar Singh.

But, his release will take time for want of completion of formalities.

Prasad’s lawyer Devarshi Mandal told PTI that they will move Special CBI court in Ranchi after it opens on Monday to seek his release following High Court order.

The RJD chief is in judicial custody in AIIMS New Delhi since January.

Explaining the release procedure, Mandal said, they have send an application to Prasad for his signature which will be submitted to the CBI court here Monday along with the HC order.

Since his signed application will be there so Prasad need not appear in person before the CBI court, he said.

The CBI court will then send the order to Birsa Munda Jail in Ranchi, in whose custody Prasad was originally sent by the court.

The Birsa Munda jail authorities will send the relevant papers to Tihar jail in the national capital, in whose custody Prasad is at present, which will enact the release process of Prasad, Mandal said.

Mandal said all the formalities are expected to be completed expeditiously and the release in all probability will happen on Monday.

Prasad will be freed after 39 months and 25 days of incarceration.

While allowing bail prayer to Prasad, the court directed him to submit his passport and not leave the country without permission.

It also instructed him not to change his address and mobile number during the bail period.

The court also ordered him to deposit Rs 5 lakh penalty amount each in two cases -- one under IPC sections and another Corruption Act -- and two sureties of Rs one lakh each.

While sentencing Prasad in the Dumka case on March 24, 2018 to 14 years in jail, a special CBI court of Ranchi had also imposed a fine of Rs 60 lakh, Rs 30 lakh each under IPC sections and corruption Act.

The instant case is related to fraudulent withdrawal of Rs 3.13 crore from the Dumka treasury in the early 1990s.

Prasad had acquired bail in three other cases of the fodder scam-Deogarh, Chaibasa and Ranchi’s Doranda trasury cases- and was waiting for judgement in the Dumka case.

The RJD leader’s lawyer Kapil Sibal appearing through video-conferencing said his client has completed half the sentence period and should be given bail.

The 73-year-old RJD supremo was airlifted to AIIMS New Delhi on January 24 last in view of his bad health.

The Rs 950 cror fodder scam took place in the Animal Husbandry department in Bihar when Prasad was the chief minister.

Lalu is in Ranchi jail after his sentence in Rs 89 lakh Deogarh trerasury case on December 23, 2017.

Meanwhile, a report from Patna, said that Prasad’s family and RJD leaders and workers expressed happiness over grant of bail to him.

But, in view of the raging coronavirus situation, RJD state president Jagdanand Singh urged all partymen not to throng the 10 Circular road residence of Rabri Devi to celebrate the order. PTI