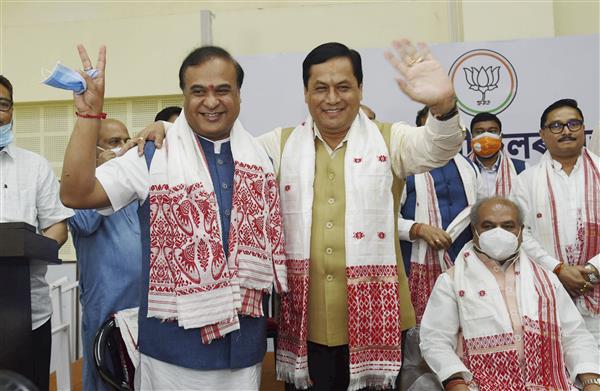 Himanta Biswa Sarma was on Sunday unanimously selected as the new chief minister of Assam.

Tomar said no other name was proposed in the meeting and that there was complete consensus on the name of Sarma.

Now that he has been officially announced as the chief minister, Sarma is expected to meet the Governor this evening and take oath as the new chief minister of Assam tomorrow.

Regarding the outgoing chief minister, Sarbanand Sonowal, sources say that the BJP is toying with a couple of ideas to accommodate him. He may be brought to the Centre via the Rajya Sabha and accommodated in the Union Cabinet.

So far, Sonowal has been saying that he was comfortable with state politics.

Notably, the BJP had not named anyone before the elections this year. Home Minister Amit Shah is believed to be backing Sarma.

It was a difficult choice nevertheless.

While incumbent CM Sonowal can be credited with helping the BJP retain Assam on account of his work, popularity, and clean image, Sarma was seen as someone who helped the party gain strength ever since he joined in 2014.

Observers say the party’s hesitancy in naming its chief minister’s face in the run-up to 2021 assembly elections was telling and indicative of a change.

Not naming Sonowal the CM in itself was indicative of the predicament that the leadership was facing over the two strongmen in Assam, even though it was contrary to the party’s stated stance—that the BJP always contests under the incumbent CM in the state it is in power.

Called ‘Jatiya Nayak’, Sonowal has emerged as a popular chief minister with a clean image and may be adjusted in a “well deserving” position at the Centre.

He is also credited with containing anger against the Centre after the CAA. Meanwhile, Sarma, who is also the convenor of the all-important North East Democratic Front (NEDA), is a popular mass leader who led the party from the front in these elections.

During the election campaign, Sonowal and Sarma both dismissed speculations of any “issues” between them and worked as a “team”.

But Sarma, who was a Cabinet minister with important portfolios in the Sonowal government, had been dropping hints regarding the arrangement.

At one point he is also believed to have told leaders that he was not interested in contesting assembly elections and that he should either be given charge of the state or brought to the Centre.