At Moscow meet, both agreed to avoid action that could escalate matters 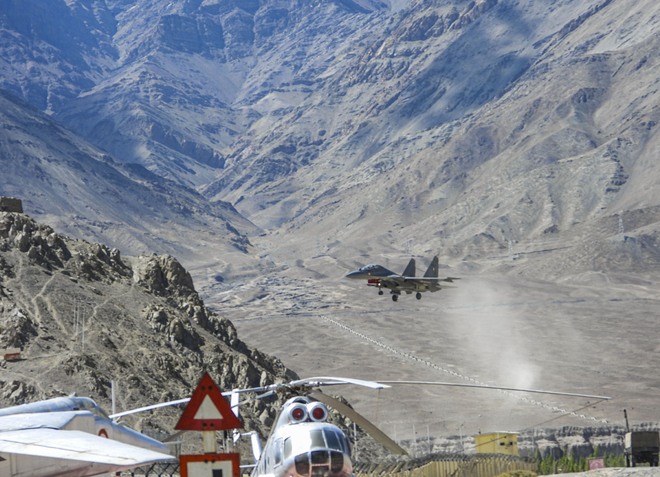 An IAF jet flies in the Ladakh region amid the LAC standoff on Friday. PTI

India and China agreed on a five-point approach that entails further talks to end the tensions on the Line of Actual Control (LAC) following a discussion between their Foreign Ministers that saw both of them touch on the linkages between bilateral ties and the border problem.

A joint statement at the end of the two-and-a-half-hour discussion in Moscow between Foreign Ministers S Jaishankar and Wang Yi saw concurrence on the path to resolve the tensions but their narratives diverged on whether the border issue was linked to the overall trajectory of bilateral relations.

Three hours after the discussion, however, the Chinese embassy e-mailed a version of the meeting that quoted Wang as stating that India-China ties were once again at a “crossroads”. Wang outlined China’s “stern” position on the situation at the border and called on the Indian side to “move back all men who have trespassed”. It said it was willing to hold “enhanced dialogue” at the field commander level to facilitate the process. Sources here said the Moscow meeting saw the Indian side seeking disengagement in all friction areas with the military commanders working out the final deployment to permanent posts. The Chinese side was also told that its large amassing of troops had created several flashpoints along the LAC.

The Chinese embassy statement quoted Jaishankar as saying that India “does not consider the development of bilateral relations as dependent on the boundary question and India does not want to go backwards”.

Sources here did not contest this Chinese assertion about Jaishankar. But they contradicted the Chinese quote about Jaishankar indirectly by stating the recent incidents in eastern Ladakh “have” impacted the development of the bilateral relationship. The sources underlined that while India recognised that a final solution would take time, peace on the border was essential for further developing bilateral ties in other spheres.

While agreeing on a five-point agenda to improve the current situation on the LAC which “is not in the interest of either side”, Jaishankar and Wang said both sides would continue the dialogue at three planes — through the Special Representative mechanism, Working Mechanism for Consultation and Coordination and field commanders level.

The ministers agreed that as the situation eases, the two sides should expedite work to conclude new confidence-building measures to maintain peace in border areas. The interaction held on the sidelines of the SCO meeting agreed not to allow differences to become disputes by abiding with all the existing agreements and protocol on China-India boundary affairs, maintain peace and tranquillity in the border areas and avoid any action that could escalate matters.