I fear Assam might return to path of violence due to BJP’s policies: Rahul Gandhi 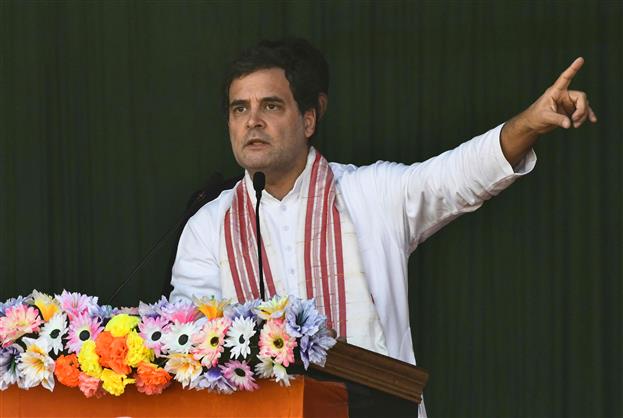 Rahul Gandhi, former President of Indian National Congress gestures as he speaks during a rally against Indias new citizenship law in Guwahati on December 28, 2019. AFP photo

Opposing the Citizenship (Amendment) Act, Rahul Gandhi on Saturday slammed the BJP and RSS, saying the Congress will not allow them to attack the culture and identity of Assam and expressed apprehension that the state is returning to the path of violence due to “anti-people” policies of the saffron party.

Addressing a public rally at Guwahati, which had seen violent protests against the CAA, the former Congress President appealed all to be united and tell the BJP that culture and identity of Assam “cannot be attacked”.

The Congress leader said he had warned the people of Assam before the Assembly elections in 2016 that hard earned peace would be hampered if the BJP came to power.

“I remember telling in every meeting before elections that if BJP formed the government, then peace, brotherhood and development would vanish from the state and violence would return. Today, I am sad to say that it has become the truth.

“I fear, the state is again returning to the path of violence due to the BJP,” Gandhi said.

He said the strength of the state is brotherhood and love, and development cannot be attained through hatred, anger and discrimination.

“Peace came to Assam after a lot of struggle. Assam Accord is the foundation of peace. So, the spirit of Assam Accord should not be broken. It gave peace to Assam and everyone loves this Accord,” he added.

The Congress MP asserted that his party is against the contentious CAA and had strongly opposed it in Parliament.

The Congress leader said he learnt love and brotherhood from Assam and speaks about it in his lecture in every other state.

“Earlier, there was violence. Then all united and then non-violence, peace and development came in the state. I am sad to inform that five youths were killed in protests and I am going to their homes after this meeting,” he added.

Gandhi questioned the governments at the state as well as Centre for “firing on youths protesting peacefully and killing them”.

“In the country, wherever the BJP goes, there is only hatred, violence and fighting between people. The BJP does not want to listen to people’s voice and wants to suppress that. If people are saying something peacefully, then there is no need to kill. It can be heard with love,” he said.

“With demonetisation and GST, you (BJP) killed the strength of Bharat Mata, you attacked Bharat Mata... (Narendra) Modi said of bringing back blackmoney, but instead he gave away Rs 3.5 lakh crore to his industrialist friends. Tax liabilities worth Rs 1.4 lakh crore were waived recently.

“How much money have you (BJP) waived to farmers for their loans? The aim of this government is to keep the people in Assam and India busy in fighting and give all the money to his 15-20 industrialist friends,” he alleged. PTI