‘I forgive,’ says Rahul Gandhi on his father Rajiv’s killers

Congress leader interacts with students, following a dialogue with people from fishermen community 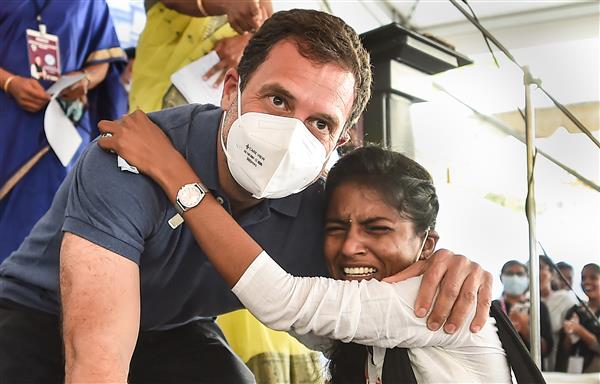 Congress leader Rahul Gandhi poses for photographs with a student during his visit to Bharathidasan Government College for Women, in Puducherry, on Wednesday, February 17, 2021. PTI

Congress leader Rahul Gandhi on Wednesday said the killing of his father Rajiv Gandhi in 1991 brought him tremendous pain but he nursed no anger or hatred towards those responsible for it.

During an interaction the Congress MP had with students of a state-run women’s college here, a pupil posed, “Your father was killed by the LTTE (Liberation Tigers of Tamil Eelam) what are your feelings about these people?” and he answered by saying violence cannot take away anything.

“I don’t have anger or hatred towards anybody. Of course, I lost my father and for me it was a very difficult time,” he said, adding, it was similar to having one’s heart severed.

To the next question, he said “violence cannot take away anything from you... my father is alive in me...my father is talking through me.”

Gandhi interacted with students of Bharathidasan Government College for Women following a dialogue with people from the fishermen community.

Though most parties supported the release of seven convicts in the Rajiv Gandhi assassination case, the Tamil Nadu Congress Committee (TNCC) had opposed it.

Rajiv Gandhi was killed on May 21, 1991 by a woman suicide bomber at Sriperumbudur near Chennai in a poll rally.

TNCC chief K S Alagiri had said a few months ago that if the Rajiv case convicts were to be set free, a demand would arise for the release of all “murder convicts” who had spent over 25 years in prison.

“If the court announces the release of seven Rajiv case convicts, we will accept it. However, political parties rooting for their release is unacceptable,” Alagiri had said.

The Tamil Nadu government had in 2018 recommended to Governor Banwarilal Purohit to release them. PTI