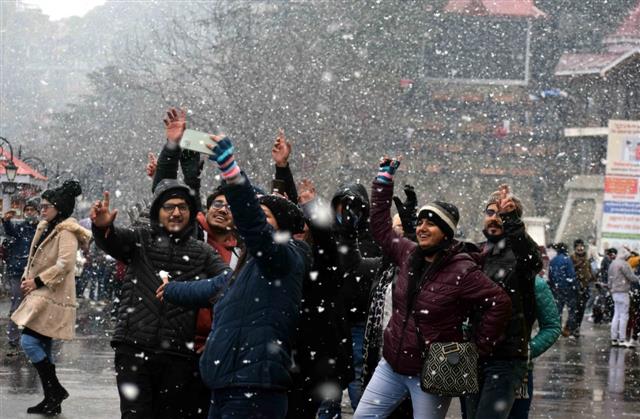 State capital Shimla on Saturday received a spell of mild snow bringing cheers to the residents and tourists.

Tourists enjoyed snow on the Ridge and clicked selfies. The hotel industry is hoping that the inflow to the queen of hills would increase with snow as the MeT department has also predicted more of it in the coming days.

Disruptions of essential services like water and electricity, communications and related services could be expected. Visibility is likely to decrease and possibility of Landslides due to heavy rain and snow in hilly regions could not be ruled out, The Met office added.

As many as 147 roads, including 108 in Lahaul and Spiti, 24 in Mandi, eight in Kullu, five in Chamba and one each in Shimla and Sirmaur district, are still closed for vehicular movement and 34 water supply schemes are disrupted.

Saloni with 23 mm of rain was wettest in the region followed by Manali 10 mm, Mandi 9 mm, Kasol and Jagindernagar and Nahan 6 mm each, Una, Baijnath, Kothi and Sundernagar 5 mm each, Hamirpur Banjar and Bijahi 4 mm each and Shimla 2mm.

Keylong in tribal Lahaul and Spiti district was coldest at night recording a minimum temperature at minus 7.2 degree C. Maximum temperature decreased by 2 to 3 degree and Bilaspur recorded a high of 15 degree C.